Russia launches final satellites for its own GPS 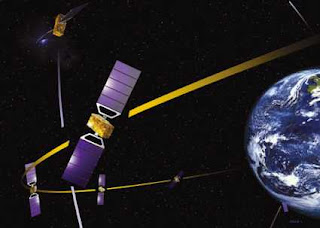 Moscow (Russia) - The last three satellites for a soviet GPS network named GLONASS (Global Navigation Satellite System) were launched without incident yesterday in an improved Proton-M carrier rocket from the Baikonur space center in Kazakhstan. The three satellites complete the system which will be fully operational in 2009, providing world-wide GPS access to GLONASS devices.
Russia's full fleet of satellites include 29 separate points for GLONASS. Today there are only 15 satellites operating, but these provide full navigation in all parts of Russia and some surrounding countries.Like the U.S. GPS system, the idea for GLONASS began in the 1970s. When the Russian economy collapsed in the 1990s, funding was stripped and the project's uncertain future was left hanging in the balance. A reinvigorated Russia under Vladimir Putin, however, has seen a significant infusion of cash and the program is now well funded.
The military-run GLONASS mapping system works over most of Russia and is expected to cover the globe by the end of 2009, once all its 24 navigational satellites are operating.
A space rocket blasted off from Russia's Baikonur cosmodrome on the steppes of neighbouring ex-Soviet Kazakhstan, from which Russia rents the facility.
"The launch was carried out smoothly at 10:32 p.m. (1932 GMT)," RIA news agency quoted a spokesman for the Russian space agency as saying. "We expect satellites to separate from the booster on the orbit at 2:24 a.m. (2324 GMT)".
Work on GLONASS -- or Global Navigation Satellite System -- began in the Soviet Union in the mid-1970s to give its armed forces exact bearings around the world.
The collapse of the Russian economy in the late 1990s drained funds and the plans withered, but President Vladimir Putin has ensured the project is now being lavishly funded from a brimming government budget.
Officials said GLONASS would mainly be used alongside the U.S. global positioning system, which Washington can switch off for civilian subscribers, as it did during recent military operations in Iraq.
The program will be fully operational in 2009 and will offer an alternative to GPS users who don't want to rely on American technology, or trickery. The early American GPS system was programmed to generate false data by the receiver. This error was called "Selective Availability" and would result in GPS coordinates that were a few hundred meters off of true coordinates. This slight error was programmed into the satellites so that, without a compensating device capable of correcting for the error (typically a military device), the GPS would produce false data that was not accurate or reliable for a given spot. Selective availability was turned off in 2000, following a 1996 executive order mandating that users receive a non-degraded signal globally. The feature still exists and/ can be re-enabled at any time.
Posted by Hybrid resources pvt. ltd at 11:35 PM