online games and gamers look set to emerge in 2008. 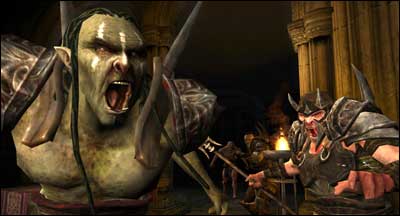 Challenges to the dominance of World of Warcraft over online games and gamers look set to emerge in 2008.
So say industry watchers looking back on a year in which the field as a whole matured and signs emerged which show how the industry sector is developing.

During the year Blizzard's flagship title consolidated its hold on gamers as its subscriber base kept growing.

But debuts by Age of Conan, Warhammer Online and many others may mean that hold begins to weaken.

"We expected, like all the analysts, to see a dip in subscriptions in 2007," said Paul Younger, an editor at the Inc Gamers network. "As it turns out we've seen the rise and rise of WoW."

At the start of 2007, the number of active subscribers playing World of Warcraft was eight million but by the end of summer the number had passed 9.3 million.

According to statistics gathered by Nielsen the average WoW player racks up 17 hours of play per week - 12 hours more than its nearest competitor The Sims. As such it was the most played PC game between April and November 2007.

In online games such as World of Warcraft players create an avatar or character, give them a profession and venture out into the game world to battle monsters, find treasure and turn their novice into a powerful hero or heroine.

Mr Younger said online games such as Lord of the Rings Online, Tabula Rasa and Hellgate: London were widely tipped to poach significant numbers of players from Blizzard but, he said, it was not clear that had happened.

"There seems to be an inability by other massively multi-player game makers to capture what Blizzard managed to capture," said Mr Younger.

Rob Fahey, industry veteran and columnist for Gameindustry.biz, said the new launches and continued success of WoW showed how strong the industry had become.

"There's plenty of choice out there for players now," he said "You can even play massively multiplayer dancing games, if killing monsters isn't your thing."

Another sign of the growing maturity of online gaming was the notable failure of titles such as Vanguard.

Although released in February it was error prone and has taken months to become reliable enough.

"It's clear that it's no longer acceptable to release buggy games, and players aren't prepared to pay a monthly fee to test an unfinished product," he said.

The importance of the final polish is also thought to be behind the delayed arrival of Age of Conan: Hyborian Adventures and Warhammer Online: Age of Reckoning. Both were originally due in 2007 but now are expected before next summer.

Many see these as serious contenders to WoW because like that game they trade on a long history of earlier works.

Conan is familiar to many from Robert E Howard's original stories, the films starring Arnold Schwarzenegger and the many contemporary novels that explored the world of the iconic barbarian.

Warhammer is the creation of UK firm Games Workshop and has many fans who played the tabletop game, the role-playing system, the earlier games and has read the books set in its world.

Perhaps more importantly the titles are attempting to move online gaming on from the mechanics established by Blizzard.

In Warhammer many areas of the game are contested and factions will battle to regain control of these areas. Solo players as well as those who prefer pitched battles will contribute to this back and forth that will see a lot of the game world's territory change hands many times.

By contrast Age of Conan is explicitly aiming at a mature audience - in particular combat will be bloody and realistic. The game will also allow player teams, or guilds, to set up and run their own cities or lay siege to each other's strongholds.

But, said Philip Wride, boss of consultancy firm Elysium Gaming, it could be something entirely outside the field that has a big impact on online gamine in 2008.

In the UK the Byron Review is scrutinising video games with a view to drawing up new regulations and guidelines governing them.

"It's about educating parents more than anything and perhaps making changes in terms of rating systems," he said.

This was likely to mean best practice guidelines for parents but may eventually involve new legislation.

"That would alter how online games are both portrayed and played," said Mr Wride.
Posted by SANJIDA AFROJ at 4:49 PM