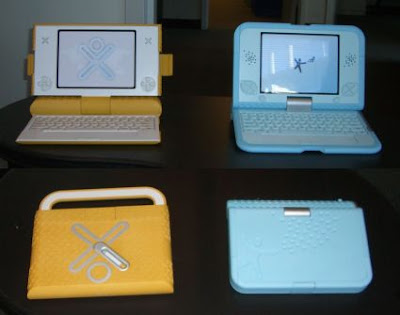 Microsoft Corp. said that it will field test an inexpensive laptop PC for developing nations being championed by Massachusetts Institute of Technology professor Nicholas Negroponte.it plans to conduct field trials in January of Windows XP running on the One Laptop Per Child XO laptop.

The XO laptop ships with a Linux operating system and is meant to be a low-cost machine available to people who live in countries with developing economies. Earlier this year, Microsoft launched its Unlimited Potential program, which allows governments to buy a US$3 software bundle designed for students, a move that some observers said would compete with the OLPC initiative.

Looking beyond the OLPC to other small PCs that use flash storage, Microsoft said it plans to publish design guidelines early in 2008 to assist flash-based device makers in building machines that will support Windows.


Microsoft's plans mark a step closer by the software company to a project initially billed as an alternative to computers based on Microsoft's technology. Mr. Negroponte had originally envisioned his One Laptop Per Child project to populate the world with $100 computers that ran Linux software, a rival to Microsoft's Windows.

But Mr. Negroponte's project has fallen far below his initial expectations, in part because of higher costs of the laptop and cheap machines from Intel Corp and Microsoft.

Microsoft in a statement said it is trying to rework Windows XP to run on Mr. Negroponte's computer, called the XO laptop. The company for the first time outlined challenges it says it faces in making the software work on the machine. Included in those challenges is that XO for uses a small amount of semiconductor-based memory for storage instead of a hard drive. Windows is designed for computers with hard drives.

James Utzschneider, general manager of Microsoft's Unlimited Potential Group said the company will test the Windows-based XO laptops starting January 2008 in the U.S., India and possibly Romania. Depending on the outcome of the trials, Windows XP for the computers could be available as early as the second half of 2008, he said.

"We want Windows to run on the XO and we are investing significant energy and talent," Mr. Utzschneider said. Still, he said the Windows XO machine will have to pass muster before Microsoft supports it for volume use. "We really want to make sure we have a quality experience before we make commitment to governments."

Microsoft in recent years has created its own programs for bring inexpensive Windows PCs to developing countries, offering stripped-down versions of the machines that can be sold cheaply. Intel meanwhile, is promoting its own low-cost PC called the Classmate.
Posted by Md Moshiur Rahman at 5:51 PM