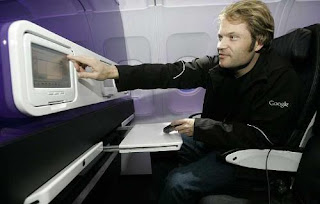 Seat 17D is yapping endlessly on an Internet phone call. Seat 16F is flaming Seat 16D with expletive-laden chats. Seat 16E is too busy surfing porn sites to care. Seat 17C just wants to sleep.
AIRCELL - Delivering high-speed Internet services using a 3-megahertz frequency band licensed from the Federal Communications Commission for $31 million in 2006. Initial service over continental United States, with plans to expand to Canada, Mexico and the Caribbean. Service on some flights of AMR Corp. (nyse: AMR - news - people )'s American Airlines and Virgin America to begin in 2008. Prices expected at about $10 a flight, though Virgin may offer cheaper, la carte services on seatback computers. Aircell LLC is based in Itasca, Ill.


Welcome to the promise of the Internet at 33,000 feet — and the questions of etiquette, openness and free speech that airlines and service providers will have to grapple with as they bring Internet access to the skies in the coming months.

"This gets into a ticklish area," said Vint Cerf, one of the Internet's chief inventors and generally a critic of network restrictions. "Airlines have to be sensitive to the fact that customers are (seated) close together and may be able to see each other's PC screens. More to the point, young people are often aboard the plane."
Posted by Md Moshiur Rahman at 5:26 AM