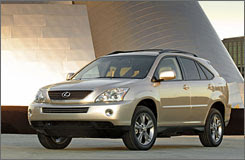 Automakers are starting to turn away from the notion of the "performance hybrid," the term coined to market gas-electric vehicles based on extra pep instead of fuel thriftiness.
With $3-a-gallon gasoline an apparent fact of life, American drivers are increasingly looking at hybrid cars.

November's hybrid sales ranked fourth in the number of sales logged nationally since the beginning of 2005, according to Ward's AutoInfoBank.

Sales were higher in March, May and June, when gasoline prices hovered around record highs. In Ohio, gas topped out in 2007 at more than $3.30 a gallon, according to the U.S. Energy Information Administration.

But unlike most years, when gas prices fall after the summer driving season ends, surging crude oil prices kept gasoline prices high. That might have prompted more car buyers to consider hybrids.

Instead of just emphasizing performance, Toyota's (TM) luxury Lexus division plans to hawk its high-end hybrid vehicles as being better for the environment because they pollute less than rival brands.
"That was always supposed to be part of the message, but it just hasn't come through," says Mark Templin, the division's new general manager. "It legitimizes what we have been doing."
Honda (HMC) has already dropped production of a six-cylinder hybrid version of its performance-oriented Accord sedan. It got poor gas mileage compared with other hybrids, such as Honda's four-cylinder Civic or Toyota's Prius.
General Motors (GM) is skipping the "performance hybrid" tactic in selling its new hybrid Chevy Tahoe and GMC Yukon SUVs. The campaign will emphasize gas stinginess even though the big vehicles offer slightly better acceleration than non-hybrid versions.
Each of three Lexus hybrids only achieves one or two miles more per gallon than their comparable non-hybrid versions. The $104,000 Lexus LS 600h L super-luxury sedan gets 21 miles a gallon in combined city/highway driving, the $41,180 RX 400h SUV achieves 25 mpg, and the $54,900 GS 450h sedan merits 23 mpg.
They are listed as being cleaner than comparable non-hybrid rivals from other luxury automakers by the Air Resources Board of California, whose regulations are tighter than federal standards and emulated in a few other states.
The Lexus models are not, however, rated as highly as Prius.
As a result, environmentalists have reservations about Lexus' ecological message when informed about it. Never fans of the performance hybrid, they say making the cleanest and most fuel-efficient vehicles possible should trump the hype about being ecological.
"It's not about marketing. It's about production," says Sam Haswell, spokesman for the Rainforest Action Network, which protested Toyota outside the Los Angeles Auto Show last month.
Adds Tim Carmichael of the Coalition for Clean Air: "It's not enough to change your marketing message."
Auto industry watchers also question the change in the marketing approach.
"They are not changing the product. They are just selling the product with a different coat of paint on it," says John O'Dell, senior editor of Edmunds' Green Car Advisor.
But Templin is hopeful. Buyers need to know Lexus hybrids are greener. "We're going to communicate that better," he vows.
Posted by Md Moshiur Rahman at 8:11 PM