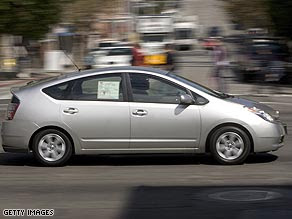 Since he was a teenager, Takeshi Uchiyamada's dream was to make a car. But as he entered his 50s as a Toyota engineer, he had all but given up hope he would ever head a project to develop a model.

In 1994, he finally got his dream. Little did he know that the car he was about to design -- the Prius -- would revolutionize the global auto industry.

With other engineers, he trudged away at 16-hour work days, patiently testing hundreds of engines. Fistfights broke out over what option to take to overcome engineering obstacles.

The Prius was a big step forward for the future of green cars. Up next for Toyota and its rivals: Far more powerful batteries for next-generation hybrids, plug-in electric cars and eventually zero-emission fuel-cell vehicles powered by hydrogen, which combines with oxygen in the air to form water.

In an interview, Uchiyamada recalled the exhaustion, the loneliness and the gambles as his team debunked Toyota's image as a safe and boring imitator of rivals' successes.

Introduced in Japan in December 1997, and the following year in the U.S., the Prius, now in its second generation, gets about 46 miles per gallon switching between a gas engine and electric motor. It has been by far the most successful hybrid, selling a cumulative 829,000 vehicles -- making up for most of Toyota's nearly 1.2 million hybrid sales.

Toyota has gotten a kick from the Prius, an enhanced global image for technological innovation, social responsibility and fashionable glamour, analysts say.

The Prius is also one solid bright spot for Toyota, whose reputation for quality is starting to tarnish as it targets a record of selling 10.4 million vehicles globally in 2009. Meanwhile, its recalls are also ballooning.

But when it all began, Uchiyamada wasn't even thinking hybrids.

Orders from management -- then president Hiroshi Okuda and Shoichiro Toyoda, the company founder's son and chairman -- were ambiguous: Come up with the 21st century car, the vehicle that would hands-down beat the competition in mileage and environmental friendliness.

Uchiyamada initially proposed an advanced gasoline engine that was quickly rejected as lacking imagination. But advanced technologies like fuel cells and the electric vehicle were too expensive for a commercial product.

Creating a hybrid would demand excruciating labor, and management had moved up the deadline to 1997. The engineering obstacles were tremendous, especially the development of the hybrid battery, which must deliver power and recharge in spurts as the car is being driven.

Uchiyamada ditched the usual back-up plans and multiple scenarios, focusing his team on one plan at a time and moving on when each failed.

As Uchiyamada tells it, the Prius wasn't the kind of car Toyota would have ever approved as a project, if standard decision-making had been followed. It was sure to be a money loser for years.

The Frankfurt auto show in August had hybrids galore.

Porsche AG showed off a version of its Cayenne sport utility vehicle that is powered by hybrid technology developed with Volkswagen, and BMW pulled back the curtain on its X6, an SUV coupe crossover hybrid.

General Motors Corp., which makes the Saturn Vue, Saturn Aura and Chevrolet Malibu hybrids, is working on a more advanced lithium-ion battery to beat Toyota in the race to bring to market plug-in hybrids, which recharge from a regular home socket. GM has begun production of a two-mode gas-electric hybrid transmission system for the 2008 Chevrolet Tahoe Hybrid and GMC Yukon Hybrid SUVs which uses a computer to choose from thousands of combinations of two electric motors and the gasoline engine.

Ford Motor Co. already has its Escape Hybrid, introduced in 2004, but is working on improved versions. Earlier this year, Ford and Southern California Edison agreed to test rechargeable hybrid vehicles in an effort to speed up their mass production.

Chrysler LLC is debuting a new hybrid system next year on the Chrysler Aspen and Dodge Durango sport utility vehicles.

Hybrids will be among the experimental, or "concept," models from Toyota's rivals on display at the Tokyo Motor Show which opened last week.

Toyota showed a "concept" plug-in Prius made of carbon fiber reinforced plastic that's about a third of the weight of the current Prius and doubles mileage.

Nissan Motor Co. has fallen behind Toyota in hybrids, and is instead focusing on electric cars with plans to mass market them by 2012.

Toyota officials acknowledge Honda Motor Co. is their biggest threat in developing new hybrids. Honda, which already markets the Civic hybrid, is hot on Toyota's heels with a hybrid sports car, a fuel-cell vehicle and other ecological cars.

Automakers worldwide seem to be taking hybrids as a serious option and demand should grow, said Koji Endo, auto analyst with Credit Suisse Japan. He noted interest in hybrids is growing in other parts of the world, such as China, a burgeoning auto market.

Yasuaki Iwamoto, auto analyst with Okasan Securities Co. in Tokyo, says Toyota faces a tough challenge with the next Prius, expected in a few years, with other automakers all hot on its heels.

"The popularity of Toyota's hybrids has been limited so far to the Prius. That means Toyota still has a lot of work to do," he said. "If a car doesn't meet consumer expectations, it won't sell. That's the fate Prius must now shoulder: It can't disappoint fans."

The third-generation Prius could include a new lithium-ion battery more advanced than the current nickel-metal hydride battery, allowing more power to be packed into a smaller battery.

But engineers acknowledge that will require a breakthrough in battery technology.

Endo said Toyota must be careful in introducing the lithium-ion battery, which has been found recently to be prone to fires in laptops. Even a single hybrid battery fire could destroy an automaker's reputation, he said.

Uchiyamada denied media reports that problems in developing the lithium-ion battery would delay the new Prius.

Toyota has other options in the works to dramatically boost mileage and performance, so a battery upgrade isn't the only way to revamp the Prius, he said. Toyota recently has begun public road tests on a plug-in hybrid.

Uchiyamada -- who has spent 38 years as an engineer at Toyota -- admits much of Prius' success was sheer luck.

He still remembers the thrill he felt when he saw a Prius on the streets driven not by an engineer, but by a real customer.

Ogiso, 46, agrees. Toyota workers -- who haven't faced massive layoffs like their American counterparts -- are invested in the company's future.
Posted by Md Moshiur Rahman at 2:48 PM