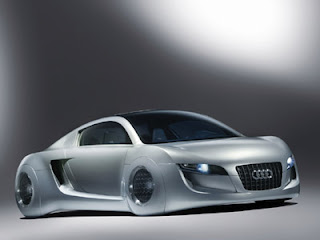 Some of the best and brightest geek squads are revving up their engines for the Defense Advanced Research Projects Agency's Urban Challenge next month.
More than 30 semifinalists will compete, beginning Friday, to qualify their robotic vehicles for the final competition on Nov. 3, in Victorville, Calif. Twenty teams will make it to the urban military training grounds on the former George Air Force Base, for cash prizes of up to $2 million.

For some in Team Berlin, that could mean slowing down a bit. The team includes engineering students and faculty from Rice University in Houston and from Freie Universität Berlin, whose home turf includes the Autobahn.

"The vehicles must perform as well as someone with a California driver's license," Darpa Director Tony Tether said in a prepared statement.

Teams from Georgia Tech, Carnegie Mellon University, Stanford University, and Virginia Tech are among the finalists.

The vehicles also will conduct simulated military supply missions to judge their performance in realistic environments.

With many technology companies and innovators participating and supporting the event, innovations from the race are used to improve car safety and robotics. The U.S. military aims to operate one-third of its vehicles without drivers by 2015. Darpa hosted its first Grand Challenge in 2004 to spur innovation needed to meet that goal.

The first year, none of the vehicles could finish the qualifying course. By 2005, 23 teams qualified and Stanford's Stanley took the $2 million prize, completing about 130 miles in nearly seven hours. This year, teams developed cars that made it through intersections with other cars and moved as smoothly as if drivers had taken the wheel.
Posted by Md Moshiur Rahman at 4:40 PM