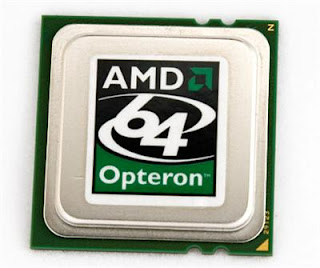 24hoursnews : Intel is aiming to extend its performance lead over AMD with the introduction of the industry's first quad-core processors designed for multi-processor servers.
The chip giant has rolled out six quad-core Xeon 7300 series processors, which deliver more than twice the overall performance and more than three times the performance per watt of its previous generation of dual-core server chips. The chips are the last to be converted to Intel's Core micro-architecture, a process that has been under way since 2006.
The 7300 series are more energy efficient than previous chips. It comprises chips that run at clock speeds of up to 2.93GHz at 130W, several 80W processors and a 1.8GHz, 50W version that is targeted specifically at four-socket blade servers.
In addition to having twice as many cores, the 7300 chips come with up to four times the memory capacity of the dual-core multi-processor platforms, which Intel maintained will allow businesses to consolidate their server environments to reduce space, power and running costs.
"Intel Xeon-based multi-processor servers are the backbone of the enterprise," said Tom Kilroy, Intel vice president and co-general manager of the digital enterprise group.
"With the Xeon 7300 series, Intel is delivering new levels of performance and performance per watt, and is driving the Intel Core micro-architecture into such innovative systems as four-socket, 16-core blades that use less energy than our older models."
The Xeon 7300 series means IT managers can pool their single, dual- and quad-core Core-based servers into a dynamic virtual server infrastructure that allows for live, virtual machine migration. This should improve situations including failover, load balancing, disaster recovery and server maintenance.
Brian Byun, VMware's vice president of global partners and solutions, said: "VMware and Intel have worked together to optimise VMware ESX Server on the Xeon 7300. Our partners and customers benefit from increased platform choice and performance headroom from the quad-core four-socket server systems."
Intel said that the 7300 series running the VMmark benchmark designed for measuring virtualisation performance, achieved the highest single server result so far. Results from key server manufacturers testing the 7300 series are also proving encouraging.
HP has proclaimed world-record results for a ProLiant DL580 G5 server running the TPC-C benchmark for database performance, while IBM claimed its 7300-based, System x3850 M2 server using the SPECint*_rate_base2006 benchmark for integer throughout, also set a new world record.
Intel claims silicon crown despite AMD Barcelonaa.

AMD's Barcelona Chip to Get Speed Boost This Year.

On the same day that Advanced Micro Devices Inc. officially released its Barcelona server processor, the company said it would have a faster version of the quad-core Opteron device out by year's end.

Initially, the top clock speed on the quad-core chip is 2 GHz. But Randy Allen, vice president and general manager of AMD's server and workstation division, said at the Barcelona launch event here Monday evening that the company will have a 2.5-GHz version ready for shipment in December.

The confirmation of the planned speed bump may have been the most significant bit of news out of the product launch, which was held at the Letterman Digital Arts Center on the grounds of the Presidio, a former U.S. Army base that now is part of the Golden Gate National Recreation Area.

The announcement mostly featured a long list of executives from hardware vendors offering support and praise for AMD without taking any shots at its main processor rival, Intel Corp. That was left to AMD officials, but even they rarely if at all mentioned Intel by name.

Hector Ruiz, AMD's chairman and CEO, said the company's initial development in 2003 of an x86-compatible Opteron that could run both 32-bit and 64-bit applications raised the bar "for what an industry should expect from a processor company."

Ruiz claimed that the new Opteron would have "a similarly profound effect on computing," even though Intel turned the tables on AMD and beat it to market with quad-core processors by 10 months. Last week, Intel released a new Xeon 7300 line of quad-core chips with clock speeds of up to 2.93 GHz.

Executives from IBM, Hewlett-Packard Co., Sun Microsystems Inc. and Dell Inc. appeared at AMD's launch event in person or via video to announce plans to add the Barcelona chip to their server product lines, with shipments scheduled to begin as early as next month. Among them was Dell Chairman and CEO Michael Dell, who said his company intends to double its lineup of AMD-based systems by year's end.

Jonathan Schwartz, Sun's president and CEO, said his company is aiming to use the quad-core Opteron to double its AMD-based server business. However, Sun in January announced a deal with Intel to develop a full of line of Xeon-based servers and workstations. That ended a two-year-old strategy under which Sun had exclusively used Opterons in its x86 systems.