Save Earth From Asteroid Strike 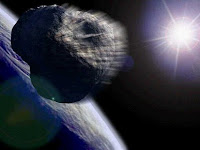 Former astronaut Rusty Schweickart has already earned his place in the history books by going to the moon with the Apollo 9 mission. However, should an asteroid crash into the Earth anytime soon, killing millions and causing catastrophic damage, he'll also be remembered as the guy whose warnings we ignored.

In 2001 Schweickart, now 71, helped found the B612 Foundation (named for the asteroid home in The Little Prince) to raise the alarm about the potential of death from above. The foundation has been loudly asking the world's space agencies to locate all the near-Earth asteroids, determine if any are likely to crash into us, and make plans to deflect them if necessary. But NASA and the other agencies have taken little action. Wired News spoke to Schweickart about the importance and frustrations of his latest mission.

Wired News: You've devoted the last six years to warning people about the catastrophic possibility of a near-Earth asteroid crashing into the Earth. Does this stuff keep you awake at night?

Rusty Schweickart: (laughs) Does it keep me up at night? Yes, but not in the way you're probably asking. I don't stay up at night worrying about an impact. I do stay up and work over in my mind various technical issues, and think about the work that needs to be done.

WN: When did you first start thinking about the threat posed by near-Earth asteroids?

Schweickart: My interest came from my prior interest in astrobiology, which is the research field looking at the origins and extent of life in the universe. When you look at the origins and evolution of life on Earth, it's been severely affected by asteroid impacts through history. I came to the clear understanding that this is not a historical process, or something that is no longer in effect. It's a continuing process, and we're continually vulnerable to, essentially, a control-alt-delete.

Life has sustained a number of those hard boots, to continue the metaphor, the demise of the dinosaurs 65 million years ago being only the most recent example that people are aware of. But there have been very damaging impacts far smaller than the one that occurred 65 million years ago, and they are far more frequent. Those are of more concern to humanity, but they're also predictable. If we know that something is going to happen and there's something we can do about it, we ought to start getting prepared.

WN: You were in the news a few years back talking about the asteroid 9942 Apophis, when it appeared there was a chance that it could hit the Earth in 2029 or 2036. That got some media attention, until further studies reduced the likelihood of impact to nearly zero. Were you relieved, or maybe a little disappointed that there was no urgent cause for action?

Schweickart: When the probability of impact in 2029 dropped to zero, I think everyone was very relieved. There is still to this day a possibility of impact in 2036. It is quite low, and it will most likely drop to zero. But Apophis has been a tremendous learning opportunity for the (near-Earth asteroid) community. It exemplifies the kind of challenge we will encounter in the future. There will be tens of thousands of near-Earth asteroids discovered in the next 10 to 20 years.

WN: The Planetary Society is still offering a $50,000 prize for the best plan to put a tracking device on Apophis when it swings by in 2029. Although it appears that will be unnecessary, do you think the design contest still serves a purpose?

Schweickart: In responding to that challenge, there are probably teams of people learning a great deal. The possibility of Apophis continuing to be a real threat is one in 45,000. But in terms of understanding the challenge that we're going to be facing with other near-Earth asteroids that we find -- and we will definitely find some that will be more threatening -- it's very useful.

The more people we have thinking seriously about this, the better. And I'm not talking about the general public wringing their hands, I mean technically qualified people seriously looking at the challenge of taking action. It's important to have people studying the orbital mechanics, the techniques we could use for deflection, and looking at the decision-making process that would be involved in deciding which asteroids to deflect. The legal and political implications will probably be the most difficult challenges. 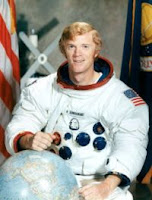 Schweickart: Who is it that makes the decision: Do we or do we not deflect this particular asteroid? Is it small enough that someone will say, "We'll just take this hit, we won't deflect this one"? If it's just going to impact a few counties, are they the only ones who pay for it? There are a million questions of that kind that will have to be answered, and not after we discover one that has our name on it, but before, so we don't end up in a decade-long debate when we're threatened.

Russell Louis "Rusty" Schweickart (born October 25, 1935) is an American astronaut. Schweickart was born in Neptune, New Jersey. He earned an S.B. and an S.M. in Aeronautics/Astronautics from MIT in 1956 and 1963 respectively

Schweickart began to suffer from space sickness on the first day in orbit forcing the postponement of the EVA. Schweickart's condition was made worse as the mission Commander James McDivitt did not report it to Mission Control (the flight surgeon could have advised Schweikart on ways of limiting the effects). Eventually Schweickart improved and completed the EVA standing on the Lunar Module and provided an evocative description of the earth.

The space sickness contributed to Schweickart being sidelined for further Apollo missions and he concentrated on the Skylab programme.

Rusty Schweickart has spoken and taught at the Esalen Institute. Schweickart is also cofounder of the B612 Foundation, a group that aims to defend Earth from asteroid impacts.

In the 1998 miniseries From the Earth to the Moon Schweickart was played by Kieran Mulroney.

In May 2005 Rusty Schweickart told the U.S. Congress that a mission to attach a device such as a radio transponder to asteroid 99942 Apophis (formerly known as 2004 MN4) should be a high priority; it is estimated that this asteroid has a 1 in 6000 probability of striking the earth in the 21st century[2]. The latest data indicates that the chance of Apophis impacting the earth is 1 in 45,000 in 2036.

Posted by Md Moshiur Rahman at 5:04 AM