Lenovo Group Ltd. said Friday it will sell a basic personal computer aimed at China's vast but poor rural market and priced as low as $199.
Lenovo's announcement follows rival Dell Inc.'s bid to boost its presence in China's booming market with the unveiling in March of a low-cost personal computer meant for novice Chinese users 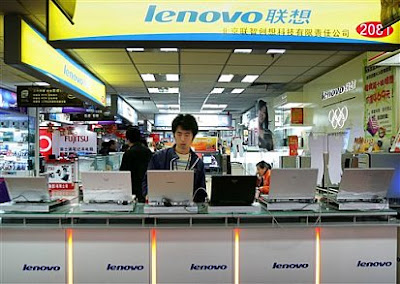 A Chinese sales clerk waits for customers as he works on Lenovo computers at a Lenovo shop in an electronics market in Beijing, in this Feb. 1, 2007 file photo. Lenovo Group Ltd., the world's No. 3 personal computer maker, reported a 12-fold jump in quarterly profits Thursday, Aug. 2, 2007, that beat market expectations as the Beijing-based company made progress in efforts to build a global brand. Profits were US$66.8 million (48.8 million) for the quarter ended June 30 on strong sales in China and the Americas, up from US$5.2 million (3.8 million) in the year-earlier period, the company said. (AP Photo/Elizabeth Dalziel, File)

Beijing-based Lenovo, which acquired IBM Corp.'s PC division in 2005, is expanding abroad but is eager to maintain its dominance in China, where research firm Gartner Inc. says PC sales grew by 23 percent last quarter.
"Our focus is to get down to the rural market," said company spokesman Jay Chen.
The new PC will use a buyer's television set as a monitor. Chen could provide no other details on the configuration or other features.
The new PC goes on sale later this year, and will range in price from $199 to $399.
Lenovo is the world's third-largest PC manufacturer, behind U.S.-based Hewlett-Packard co. and No. 2 Dell.
Dell, based in Round Rock, Texas, announced in March that it will sell a basic desktop PC designed for China and priced at $223 to $515.
Chen denied that Lenovo was responding to Dell's initiative. He said Lenovo has been selling a low-cost PC loaded with educational and other software meant for rural Chinese families since 2004.
"It's a natural evolution. We are not responding to our competitors," Chen said. "After three years of market development in low-tier markets we have gained experience and understanding."
Some 800 million people live in China's countryside, where incomes average about $560 a year but are rising at an annual rate of more than 10 percent.
Lenovo said it will set up a rural sales network of 5,000 dealers to reach farmers and other customers.
On Thursday, Lenovo reported a 12-fold jump in profits in the quarter ending June 30, with earnings of $66.8 million on revenues of $3.9 billion.