LHC
The Large Hadron Collider (LHC) is a particle accelerator and collider located at CERN, near Geneva, Switzerland (46°14′N, 6°03′E). Currently under construction, the LHC is scheduled to begin operation in May 2008.[1] The LHC is expected to become the world's largest and highest energy particle accelerator. The LHC is being funded and built in collaboration with over two thousand physicists from thirty-four countries, universities and laboratories.
When switched on, it is hoped that the collider will produce the elusive Higgs boson particle — often dubbed the God Particle — the observation of which could confirm the predictions and 'missing links' in the Standard Model of physics, and explain how other elementary particles acquire properties such as mass. 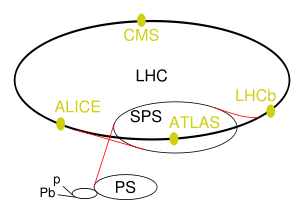 Technical DesignThe collider is contained in a 27 kilometre (17 mi) circumference tunnel located underground at a depth ranging from 50 to 175 metres.[2] The tunnel was formerly used to house the LEP, an electron-positron collider.
The three metre diameter, concrete-lined tunnel actually crosses the border between Switzerland and France at four points, although the majority of its length is inside France. The collider itself is located underground, with many surface buildings holding ancillary equipment such as compressors, ventilation equipment, control electronics and refrigeration plants.
The collider tunnel contains two pipes enclosed within superconducting magnets cooled by liquid helium, each pipe containing a proton beam. The two beams travel in opposite directions around the ring. Additional magnets are used to direct the beams to four intersection points where interactions between them will take place.
The protons will each have an energy of 7 TeV, giving a total collision energy of 14 TeV. It will take around ninety microseconds for an individual proton to travel once around the collider. Rather than continuous beams, the protons will be "bunched" together into approximately 2,800 bunches, so that interactions between the two beams will take place at discrete intervals never shorter than twenty-five nanoseconds apart. When the collider is first commissioned, it will be operated with fewer bunches, to give a bunch crossing interval of seventy-five nanoseconds. The number of bunches will later be increased to give a final bunch crossing interval of twenty-five nanoseconds.
Prior to being injected into the main accelerator, the particles are prepared through a series of systems that successively increase the particle energy levels. The first system is the linear accelerator Linac2 generating 50 MeV protons which feeds the Proton Synchrotron Booster (PSB). Protons are then injected at 1.4 GeV into the Proton Synchrotron (PS) at 26 GeV. The Low-Energy Injector Ring (LEIR) will be used as an ion storage and cooler unit. The Antiproton Decelerator (AD) will produce a beam of anti-protons at 2 GeV, after cooling them down from 3.57 GeV. Finally the Super Proton Synchrotron (SPS) can be used to increase the energy of protons up to 450 GeV.
Six detectors are being constructed at the LHC. They are located underground, in large caverns excavated at the LHC's intersection points. Two of them, ATLAS and CMS are large, "general purpose" particle detectors. The other four (LHCb, ALICE, TOTEM, and LHCf) are smaller and more specialized.
The LHC can also be used to collide heavy ions such as lead (Pb) with a collision energy of 1,150 TeV.
The size of the LHC constitutes an exceptional engineering challenge with unique safety issues. While running, the total energy stored in the magnets is 10 GJ, and in the beam, 725 MJ. Loss of only 10−7 of the beam is sufficient to quench a superconducting magnet, while the beam dump must absorb an energy equivalent to a typical air-dropped bomb. For comparison, 725 MJ is equivalent to the detonation energy of approximately 157 kg (347 pounds) of TNT, and 10 GJ is about 2.5 tons of TNT.

Posted by Md Moshiur Rahman at 4:48 AM