When in operation, about seven thousand scientists from eighty countries will have access to the LHC, the largest national contingent (seven hundred) being from the United States. Physicists hope to use the collider to enhance their ability to answer the following questions:

Is the popular Higgs mechanism for generating elementary particle masses in the Standard Model violated? If not, how many Higgs bosons are there, and what are their masses?

Will the more precise measurements of the masses of baryons continue to be mutually consistent within the Standard Model?

Do particles have supersymmetric ("SUSY") partners?

Why are there apparent violations of the symmetry between matter and antimatter?

Are there extra dimensions, as predicted by various models inspired by string theory, and can we "see" them?

What is the nature of dark matter and dark energy?
Why is gravity so many orders of magnitude weaker than the other three fundamental forces?

LHC as an ion collider

The LHC physics program is mainly based on proton-proton collisions. However, shorter running periods, typically one month per year, with heavy-ion collisions are included in the programme. While lighter ions are considered as well, the baseline scheme deals with lead (Pb) ions.This will allow an advancement in the experimental programme currently in progress at the Relativistic Heavy Ion Collider (RHIC).

After some years of running, any particle physics experiment typically begins to suffer from diminishing returns. The way around the diminishing returns is to upgrade the experiment, either in energy or in luminosity.
A luminosity upgrade of the LHC, called the Super LHC, has been proposed, to be made after ten years of LHC operation. The optimal path for the LHC luminosity upgrade includes an increase in the beam current (i.e., the number of protons in the beams) and the modification of the two high luminosity interaction regions, ATLAS and CMS. To achieve these increases, the energy of the beams at the point that they are injected into the (Super) LHC should also be increased to 1 TeV. This will require an upgrade of the full pre-injector system, t 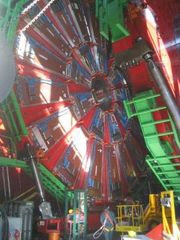 he needed changes in the Super Proton Synchrotron being the most expensive.

COST
The construction of LHC was originally approved in 1995 with a budget of 2600 million Swiss francs (currently about 1.7 billion euro), with another 210 million francs (€140 m) towards the cost of the experiments. However, cost over-runs, estimated in a major review in 2001 at around 480 million francs (€300 m) in the accelerator, and 50 million francs (€30 m) for the experiments, along with a reduction in CERN's budget pushed the completion date out from 2005 to April 2007.180 million francs (€120 m) of the cost increase has been the superconducting magnets. There were also engineering difficulties encountered while building the underground cavern for the Compact Muon Solenoid.

Safety concerns
While many have voiced concerns that the LHC will destroy the Universe, engineers close to the project claim that the possibility is infinitesimally small. As CERN has pointed out, if the Earth were in danger of any such fate, it would have happened billions of years ago from the bombardment of protons the planet receives that are millions of times more energetic than anything that could be produced by the LHC.
As with the Relativistic Heavy Ion Collider (RHIC), people both inside and outside of the physics community have voiced concern that the LHC might trigger one of several theoretical disasters capable of destroying the Earth or even our entire Universe. RHIC has been running since 2000 and has generated no major problems; however the Large Hadron Collider is set to create an environment significantly more alien to nature than the RHIC has ever created, and therefore the probability of catastrophe is greater.[citation needed]
Theoretical disasters include:
Creation of a stable black hole inside the earth which would destroy our planet within 4 to 6 minutes.[citation needed]
Creation of strange matter that is more stable than ordinary matter
Creation of magnetic monopoles that could catalyze proton decay
Triggering a transition into a different quantum mechanical vacuum (see False vacuum)
It is possible that the Large Hadron Collider will create tiny black holes within the Earth . Most physicists expect that Hawking Radiation will cause these black holes to dissipate. The primary cause for concern is the fact that Hawking Radiation - the only means by which these black holes could be dissipated, is entirely theoretical.
CERN performed a study to investigate whether such dangerous events as micro black holes, strangelets, or magnetic monopoles could occur. The report concluded, "We find no basis for any conceivable threat." If black holes are produced, they are expected to evaporate almost immediately via Hawking radiation and thus be harmless, although the existence of Hawking radiation is currently unconfirmed. It has been claimed that a strong argument for the safety of colliders such as the LHC comes from the simple fact that cosmic rays with energies up to twenty million times the LHC's 1.4×10¹³ eV capacity have been bombarding the Earth, Moon and other objects in the solar system for billions of years with no such effects.
However many people remain concerned about the safety of the LHC such as the science watchdog group called the Lifeboat Foundation which has covered these dangers in detail. As with any new and untested experiment, it is not possible to say with utter certainty what will happen. John Nelson at the University of Birmingham stated of RHIC that "it is astonishingly unlikely that there is any risk—but I could not prove it."Furthermore, in academia there is some question, albeit among a minority of scientists, of whether the Hawking radiation theory is correct.
Construction accidents
On October 25, 2005, a technician was killed in the LHC tunnel when a crane load was accidentally dropped
On March 27, 2007, there was an incident during a pressure test involving one of the LHC's inner triplet magnet assemblies provided by Fermilab and KEK. No people were injured, but a cryogenic magnet support broke. Analysis revealed that its design, made as thin as possible for better insulation, was not strong enough to withstand the forces generated by a sudden shutdown. Details are available in a statement from Fermilab, with which CERN is in agreementRepairing the broken magnet and reinforcing the eight identical copies used by LHC caused a postponement of the planned November 26, 2007 startup date [19] to May 2008.[20]

Notes and references
^ New start-up schedule for world's most powerful particle accelerator
^ Symmetry magazine, April 2005
^ "...in the public presentations of the aspiration of particle physics we hear too often that the goal of the LHC or a linear collider is to check off the last missing particle of the standard model, this year’s Holy Grail of particle physics, the Higgs boson. The truth is much less boring than that! What we’re trying to accomplish is much more exciting, and asking what the world would have been like without the Higgs mechanism is a way of getting at that excitement." -Chris Quigg, Nature's Greatest Puzzles
^ Ions for LHC
^ PDF presentation of proposed LHC upgrade
^ Maiani, Luciano (16 October 2001). LHC Cost Review to Completion. CERN. Retrieved on 2001-01-15.
^ Feder, Toni (December 2001). "CERN Grapples with LHC Cost Hike". Physics Today 54 (12): 21. Retrieved on 2007-01-15.
^ Tiny Black Holes - Physicist Dave Wark of Imperial College, London reporting for NOVA scienceNOW
^ Dimopoulos, S. and Landsberg, G. Black Holes at the Large Hadron Collider. Phys. Rev. Lett. 87 (2001).
^ American Institute of Physics Bulletin of Physics News, Number 558, September 26, 2001, by Phillip F. Schewe, Ben Stein, and James Riordon
^ Blaizot, J.-P. et al. Study of Potentially Dangerous Events During Heavy-Ion Collisions at the LHC. (PDF)
^ R. A. Mewaldt "Cosmic Rays" — an article accepted for publication in the Macmillan Encyclopedia of Physics in 1996
^ Jonathan Leake:Big Bang machine could destroy Earth, Sunday Times
^ Adam D. Helfer: General Relativity and Quantum Cosmology
^ Hewett, JoAnne (25 October 2005). Tragedy at CERN (Blog). Cosmic Variance. Retrieved on 2007-01-15. author and date indicate the beginning of the blog thread
^ CERN (26 October 2005). Message from the Director-General (in English and French). Press release. Retrieved on 2007-01-15.
^ LHC Magnet Test Failure
^ Updates on LHC inner triplet failure
^ The God Particle. www.bbc.com. Retrieved on 2007-05-22.
^ CERN (2007-06-22). CERN announces new start-up schedule for world’s most powerful particle accelerator. Press release. Retrieved on 2007-07-01.

lists of all the beam parameters for the LHC.
by www.24hoursnews.blogspot.com
Posted by Md Moshiur Rahman at 5:04 AM