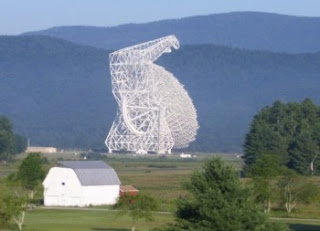 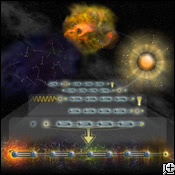 Two teams of astronomers have identified the signal of a new negatively charged molecule, or anion, in space — only the third found in the cosmos. About 130 neutral and 12 positively charged molecules have been detected in space.
Along with its two siblings, the newfound anion, called octatetraynyl, could be among the building blocks of the organic molecules that make up living things. Even more interestingly, the two teams found the anion in entirely different cosmic locales.
Octatetraynyl is an odd little string of eight carbon atoms and a single hydrogen atom, written as C8H-. Its negative charge comes from the molecule having one electron more than is needed to balance the positive protons in all the atoms' nuclei.

It's not the sort of molecule that would last long on Earth, where there are all sorts of reactive molecules ready to make it neutral.
"Some of the things we're detecting in space you'd never find on Earth," said Anthony Remijan of the National Radio Astronomy Observatory (NRAO).
That's what makes them hard to find in space, he explained: Not having them here, we are hard put to know what they will look like. That has made the hunt a long and multi-disciplinary process.
The search began in the 1990s, when radio astronomers surveying the sky noticed some unusual lines showing up in spectrums of radio signal, Remijan explained.
Such lines are usually the calling cards of specific compounds, which absorb or emit very narrow radio bands. But in this case, no one knew of any compounds that produced such lines.
Other researchers, including Eric Herbst of Ohio State University, had already done some calculations and made models about what sorts of compounds might produce certain radio lines. But it took actual laboratory tests on manmade versions of the molecules to verify what kind of radio lines anions would make.
For octatetraynyl, that lab work was completed only last year.

Finally, radio astronomers went looking specifically for octatetraynyl's laboratory-tested lines. A Harvard team looked at a cold, dark gas cloud and a team from NRAO looked in the tenuous outer envelope of a dying star.
Both teams used the National Science Foundation's giant Green Bank Telescope (GBT) in West Virginia, which sees the universe in radio waves. Both found octatetraynyl.
"It's not so different physically," said Herbst of the two space environments. They have similar temperatures and densities, he said, though the way the anion was created could be different.

Which raises a big question: How do the molecules get their extra electron?
"One mechanism is a two-body process," said Herbst. In other words, a free-flying electron simply slams into a molecule and sticks.
As for whether more anions will be discovered in space, "There are many other candidates," Herbst told Discovery News. "But they have to be measured in the laboratory first." Then radio astronomers will know what to look for.

About Green Bank Telescope (GBT)
Construction has been completed on the world's largest fully steerable radio telescope at the National Radio Astronomy Observatory's site in Green Bank, Pocahontas County, West Virginia (79° 50' 23.40" W, 38° 25' 59.23" N : NAD83).
The GBT is described as a 100-meter telescope, but the actual dimensions of the surface are 100 by 110 meters. The overall structure of the GBT is a wheel-and-track design that allows the telescope to view the entire sky above 5 degrees elevation. The track, 64 m (210 ft) in diameter, is level to within a few thousandths of an inch in order to provide precise pointing of the structure while bearing 7300 metric tons (16,000,000 pounds) of moving weight.
The GBT is of an unusual design. Unlike conventional telescopes, which have a series of supports in the middle of the surface, the GBT's aperture is unblocked so that incoming radiation meets the surface directly. This increases the useful area of the telescope and eliminates reflection and diffraction that ordinarily complicate a telescope's pattern of response. To accommodate this, an off-axis feed arm cradles the dish, projecting upward at one edge, and the telescope surface is asymmetrical. It is actually a 100-by-110 meter section of a conventional, rotationally symmetric 208-meter figure, beginning four meters outward from the vertex of the hypothetical parent structure.
The GBT's lack of circular symmetry greatly increases the complexity of its design and construction. The GBT is also unusual in that the 2,004 panels that make up its surface are mounted at their corners on actuators, little motor-driven pistons, which make it easier to adjust the surface shape. Such adjustment is crucial to the high-frequency performance of the GBT in which an accurate surface figure must be maintained.
The GBT is equipped with a novel laser-ranging system. Beams of light are reflected within the structure and between the telescope and a series of ground stations surrounding the telescope in a broad ring. Monitoring of these beams show the deformation of the figure under such stresses as gravity, wind and temperature differences, and allow the telescope's motors, subreflector and surface panel actuators to compensate for any ill effects.

Posted by Md Moshiur Rahman at 5:51 AM