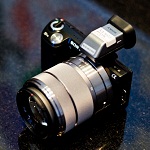 Sony made some noise this morning with announcement of five cameras. The new cameras include the Alpha A65 and A77 D-SLRs, both with a translucent mirror and OLED viewfinder. Three NEX cameras, the NEX-5N and NEX-7 for photographers and the NEX-VG20 for videographers arrived on the scene, along with a trio of new E-mount lenses.

The Alpha A77, which replaces the A700, is built around a 24.3-megapixel APS-C Exmor CMOS image sensor, and features a new Bionz image processor and a translucent mirror that allows the camera to shoot at an amazing 12 frames per second with continuous autofocus. An innovative shutter, which uses an electronic first curtain, helps to speed up shooting and reduces shutter lag to less than 50 milliseconds.

The camera's eye-level electronic viewfinder is built on OLED technology, and it's astounding to look through. It refreshes very quickly and boasts an extremely sharp 2.359 million dot resolution, with none of the light fall off or coverage issues that are present when using a pentaprism or pentamirror optical viewfinder.


Its rear LCD features an innovative hinge system, which makes it possible to position it so you can view it form the top, bottom, or either side of the camera. The A77 can capture video at 1080p60 or 1080p24 resolution using the AVCHD Progressive codec. If you’d rather record direct to MP4, you can do so at 1080i60 or 1080p30.

The camera’s magnesium alloy body is sealed against the elements, and includes built-in GPS for geotagging. A vertical battery grip accessory is available, which is also sealed. Sony is launching a new kit lens with the A77, a 16-50mm f/2.8 SSM zoom lens. The camera will be available in October for $1,399 as a body only or for $1,999 with the kit lens.

The A65, which will be made available at the same time, is a pared-down version of the A77, targeted at a consumer audience. The camera features a 24-megapixel Exmor CMOS sensor, and is capable of 10 frames per second shooting with continuous autofocus. Its AF system is less advanced than that of the A77, its kit lens is the standard 18-55mm f/3.5-5.6 variety, and its LCD features a simplified tilting mechanism. The camera’s body is polycarbonate, and it is a bit smaller than the A77. There are many shared features between the two cameras, including the OLED EVF, GPS support, and the translucent mirror design. The A65 will be available as a body only for $899 or with the kit lens for $999.

The second generation of the NEX system continues to roll out, featuring two more upgraded bodies and one completely new camera. The latter, the NEX-7, is an enthusiast-targeted mirrorless interchangeable lens camera, loaded with the same 24.3-megapixel sensor, OLED EVF, and video capabilities found in the A77. The camera features the same tilting 3” LCD that has been used across the NEX line, and is packed with as many manual controls as Sony could fit on its svelte body. It is capable of shooting images at 10 frames per second, and cuts shutter lag to 0.02 second thanks to its use of an electronic first curtain design.

The Tri-Navi system, which uses three control wheels, allows you to quickly adjust shooting settings, without having to delve into menus. It somehow manages to squeeze a built-in pop-up flash and an Alpha hot shoe in as well. The camera will be available in November at a price of $1,199 for the body only or $1,349 with an 18-55mm kit lens with a matching black finish. That lens will be available only in the kit.

The NEX-5N, which replaces the NEX-5, is a 16.1-megapixel camera with a touch-screen interface. Sony has designed the interface so that the screen augments the physical buttons on the camera rather than replacing them. The camera shares the shutter design of the NEX-7 for extremely fast performance, although it does not include an integrated OLED EVF. Rather, an accessory viewfinder, which will only be compatible with the NEX-5N, will be available to add the same high-resolution OLED to the camera, priced at $349. The camera will be available in early September in black, silver, or white as a body only for $599, or $699 with the 18-55mm lens.

Sony has also released an update to their NEX-VG10 camcorder, the NEX-VG20. Available in November for $2,199 with an 18-200mm lens, or $1,599 as a body only, the camcorder offers a few upgrades over its previous incarnation. Its resolution has been improved to 16.2 megapixels, and it can now capture RAW stills, 1080p60 and 1080p24 video, and 5.1-channel sound. A new grip and belt design, an additional Record button, and a wireless remote control are also now part of the package.

The NEX lens line-up is also expanding with three new optics. The E 50mm F1.8 OSS adds a fast, standard angle prime lens to the system, which should really work well in low-light situations when coupled with the outstanding high ISO capability of the NEX system. Sony has also announced a companion telezoom that should match well with the existing 18-55mm kit lens. The E 55-210mm F4.5-6.3 OSS lens will come in handy for situations when you need some extra reach with the camera, such as at sporting events or the zoo. Finally, the Carl Zeiss SonnarT* E 24mm F1.8, the first Zeiss-designed lens for the NEX system, steps in to provide fast, wide-angle coverage. Its offers a field of view that is equivalent to 36mm on full frame cameras, making it a great asset to street photographers, photojournalists, and others with the aspiration to be the next Cartier-Bresson.

Rounding out the announcements is a new Alpha lens adapter for the NEX system. It does not replace the existing adapter; instead it brings improved autofocus performance when using Alpha lenses on a NEX camera. The LA-EA2 adapter, set to retail for $399, features a translucent mirror and a dedicated phase detect autofocus sensor. This provides much faster focus performance than the contrast detect system currently used in the NEX. It is compatible with all NEX cameras, although a firmware update will be required for older bodies.
Posted by Unknown at 2:49 PM