Discovered a new method to manipulate atoms Helps with Nanotechnology .. 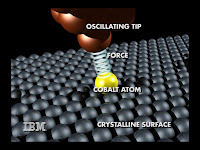 Nanotechnology Helps Scientists 'Write' With Atoms Using An Atomic Force Microscope
An international team of scientists, among them researchers from the department of Theoretical Condensed Matter Physics of the Universidad Autónoma de Madrid (UAM),have discovered a new method to manipulate atoms.

Nanotechnology exploits the properties of materials on a nanometric scale, (a nanometer is one millionth of a millimeter). The ultimate limit for such miniaturization is the development of devices formed by atomic structures created artificially to fulfill a determined purpose.

The tools that permit the visualization and manipulation of atoms are called proximity microscopes. This includes the Scanning Tunneling Microscope (STM), whose development in 1986 earned G. Binning and H. Rohrer the Novel prize for physics, and more recently the Atomic Force Microscope (AFM).

In a study published in the journal Science, an international team of scientists, including researchers from the Theoretical Condensed Matter Physics department at the Universidad Autónoma de Madrid, present a new method for the manipulation of atoms based on the AFM that makes it possible to build stable atomic structures at room temperature.

Unlike all previously developed atomic manipulation methods that consist of pushing or pulling atoms from the surface of a material using the tip of the microscope and require very low temperatures, the new method is based on the controlled interchange of an atom at the tip for a surface atom when the two are close enough. Using the atoms at the tip (that are chemically different to those at the surface) as “ink”, it is possible to “write” or “draw” with the microscope. This interchange process can be repeated in different positions over the surface to form complex structures very efficiently. In particular, this group has “written” the chemical symbol for silicon “Si” (which is the chemical element used as “ink”) on a surface covered with tin atoms.

Thanks to numerical simulations based on quantum mechanics that require the use of supercomputers it has also been possible to explain the basic atomic mechanism behind this process and determine the conditions under which it takes place.

This new manipulation scheme drastically reduces the time necessary to realize complex atomic structures. It can even be used at room temperature and has been proven to work on various semiconductor surfaces. Therefore, this method opens new perspectives in fields like Material Science, Nanotechnology, Molecular Electronics and Spintronics. In particular, the combination of the capacity of the AFM to manipulate individual atoms on surfaces with the possibility of identifying the chemical element. This was demonstrated by the same team in an article published in last year's Nature and will enable the construction of nanostructures with properties and functionalities specified to improve the yield of electronic devices.

For example, placing specific dopant elements in the best position on semi-conductive surfaces to increase the efficiency of nanometric transistors or magnetic atoms would open the possibility of developing devices based on the control of the spin of an electron. These techniques could also bring the possibility of “nano-facturing” of qbits, which are the basic components of what could eventually become a quantum computer.

more...
Scientists Manipulate Atoms on a Rough 3-DSurface
Ohio University nanoscientists have used a scanning tunneling microscope (STM) to manipulateindividual atoms on a rough terrain. It is the first atom manipulation of its kind done on athree-dimensional surface. Only a select group of scientists have manipulated individual atoms because the procedure requires atomicscale precision and control. Even greater precision and accuracy is required for atom manipulation on roughsurfaces. A movie of the atom extraction can be viewed online. "This technique is very useful to produce single atoms for atomic constructions. It also helps us understandone of the most fundamental subjects, interaction between the matters,” said Saw-Wai Hla, the leadresearcher and an associate professor of physics and astronomy at Ohio University. The research waspublished in a recent issue of Physical Review Letters.To perform the manipulation, the researchers coat a custom-built, low-temperature STM tip with silveratoms. Some of the silver atoms are deposited by gently touching the tip to the silver surface. Athree-dimensional image of the silver cluster is taken to determine ideal target zones for atom removal.Once ideal areas have been located, the silver-coated tip approaches the silver cluster — but they nevermake contact. Approaching the tip within less than a tenth of a nanometer of the cluster loosens the topatom. Moving the tip laterally across the surface drags the loosened atom and results in extraction. The STM tip does not have to come in contact with the cluster because close proximity of the atoms causesreduced binding. This concept is based on theory proposed by University of Central Florida researchers ledby Professor Talat Rahman.
Posted by SANJIDA AFROJ at 9:56 PM