What are the unique properties of all stem cells? 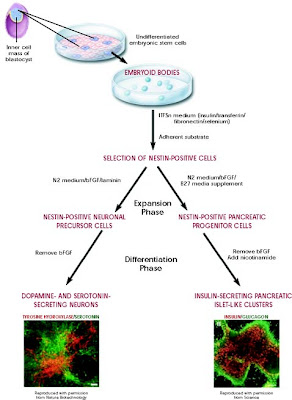 Stem cells have the remarkable potential to develop into many different cell types in the body. Serving as a sort of repair system for the body, they can theoretically divide without limit to replenish other cells as long as the person or animal is still alive. When a stem cell divides, each new cell has the potential to either remain a stem cell or become another type of cell with a more specialized function, such as a muscle cell, a red blood cell, or a brain cell.

Stem cells differ from other kinds of cells in the body. All stem cells—regardless of their source—have three general properties: they are capable of dividing and renewing themselves for long periods; they are unspecialized; and they can give rise to specialized cell types.

Scientists are trying to understand two fundamental properties of stem cells that relate to their long-term self-renewal:

why can embryonic stem cells proliferate for a year or more in the laboratory without differentiating, but most adult stem cells cannot; and
what are the factors in living organisms that normally regulate stem cell proliferation and self-renewal?
Discovering the answers to these questions may make it possible to understand how cell proliferation is regulated during normal embryonic development or during the abnormal cell division that leads to cancer. Importantly, such information would enable scientists to grow embryonic and adult stem cells more efficiently in the laboratory.

Stem cells are unspecialized. One of the fundamental properties of a stem cell is that it does not have any tissue-specific structures that allow it to perform specialized functions. A stem cell cannot work with its neighbors to pump blood through the body (like a heart muscle cell); it cannot carry molecules of oxygen through the bloodstream (like a red blood cell); and it cannot fire electrochemical signals to other cells that allow the body to move or speak (like a nerve cell). However, unspecialized stem cells can give rise to specialized cells, including heart muscle cells, blood cells, or nerve cells.

Stem cells are capable of dividing and renewing themselves for long periods. Unlike muscle cells, blood cells, or nerve cells—which do not normally replicate themselves—stem cells may replicate many times. When cells replicate themselves many times over it is called proliferation. A starting population of stem cells that proliferates for many months in the laboratory can yield millions of cells. If the resulting cells continue to be unspecialized, like the parent stem cells, the cells are said to be capable of long-term self-renewal.

Stem cells can give rise to specialized cells. When unspecialized stem cells give rise to specialized cells, the process is called differentiation. Scientists are just beginning to understand the signals inside and outside cells that trigger stem cell differentiation. The internal signals are controlled by a cell's genes, which are interspersed across long strands of DNA, and carry coded instructions for all the structures and functions of a cell. The external signals for cell differentiation include chemicals secreted by other cells, physical contact with neighboring cells, and certain molecules in the microenvironment.

Adult stem cells typically generate the cell types of the tissue in which they reside. A blood-forming adult stem cell in the bone marrow, for example, normally gives rise to the many types of blood cells such as red blood cells, white blood cells and platelets. Until recently, it had been thought that a blood-forming cell in the bone marrow—which is called a hematopoietic stem cell—could not give rise to the cells of a very different tissue, such as nerve cells in the brain. However, a number of experiments over the last several years have raised the possibility that stem cells from one tissue may be able to give rise to cell types of a completely different tissue, a phenomenon known as plasticity. Examples of such plasticity include blood cells becoming neurons, liver cells that can be made to produce insulin, and hematopoietic stem cells that can develop into heart muscle. Therefore, exploring the possibility of using adult stem cells for cell-based therapies has become a very active area of investigation by researchers.
Posted by Unknown at 11:28 AM