Scientist's promise on collider The LHC's purpose is "fundamental research" 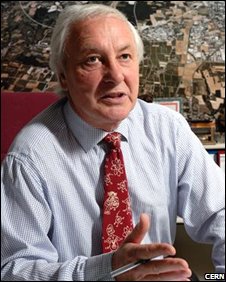 The Welsh scientist who is in charge of the world's biggest experiment says it will not result in another "Big Bang".

Dr Lyn Evans, 63, from Aberdare, south Wales will set off the Large Hadron Collider (LHC) border with a click of his computer mouse.

There have been some warnings the experiment on Wednesday could wreak disaster for the entire world.

But the physicist and project leader said: "Don't worry, there will not be a tsunami in Cardiff Bay."

Dr Evans confidently dismissed the claims the LHC switch on in front of millions could herald the end of the world, or any other disaster, which have been put forward by rival scientists.

He said it was a pity that they had "stirred up" such controversy.

"It's total hogwash. We're not in the business of science fiction, we are in science."

The LHC which Dr Evans said is "a discovery machine, the most sophisticated scientific instrument of our time" will smash two beams of particles head-on at super-fast speeds, recreating the conditions in the Universe moments after the Big Bang.

Scientists hope to see new particles in the debris of these collisions, revealing fundamental new insights into the nature of the cosmos.

Dr Evans is now just over a year away from retirement after almost four decades devoted to the research.

He said while they hope it will give clues to the origins of the universe, they do not know exactly what results the £4.4bn experiment will give.

It will take place in a purpose built tunnel under the French-Swiss border and will involve hundreds of scientists.


The LHC's purpose is "fundamental research"

He said the research was "very fundamental" but it could also lead to some exciting offshoots.

Dr Evans grew up in Cwmbach, Aberdare, in the Cynon Valley, the son of a coalmining family.

He attended Aberdare Grammar School where his early interest in science blossomed and went on to take a degree and PhD in physics at Swansea University.

In 1969 he went on a three month visit to the European Organisation for Nuclear Research (CERN) project in Switzerland.

He and his wife Linda, who is from Trecynon also in the Cynon Valley, and their family have stayed there ever since.

But there are still strong links with his Welsh roots.

Dr Evans is a honorary fellow of Swansea University where he is looking forward to return in December to deliver a lecture.

He is also a professor of physics at Imperial College in London and he said he imagines that role will still keep him busy when he retires from CERN in 18 months time.

He is also a keen watcher, largely via satellite TV, of the fortunes of the Wales' resurgent rugby team.

First Minister Rhodri Morgan has paid tribute to Dr Evans saying he hopes his success at CERN will be an inspiration to young Welsh scientists and engineers.

And Dr Evans is passionate too about the importance of encouraging youngsters along the path his career has taken.

"All over Europe there are problems that there are not enough people going into science," he added.

He will have the eyes of the world's media focussed on the underground laboratory on Wednesday.

"Making a particle accelerator work is not trivial, making it work with the whole media of the world on your back is going to be tough."
Posted by Unknown at 12:34 PM