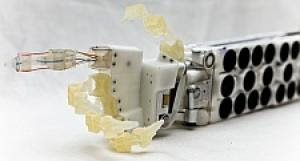 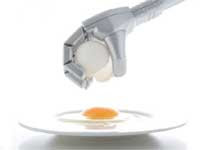 A European research project has brought the dream of human-like robots closer to reality by creating a human-like arm and hand controlled by an electronic ‘brain’ modelled on the human cerebellum.European researchers have created a robotic hand that mimics the flexibility and sensitivity of a human hand, and is controlled by a neural-network-based program modelled on the cerebelloum.The hand developed as part of the research project Sensopac being run by 12 groups — can grasp an egg, snap its fingers, and carry coffee.Experts at the German Aerospace Centre (DLR) have revealed that they made a robotic "skin" out of a thin, flexible carbon that changes its resistance depending on pressure.According to them, this enabled the robot hand to tell the shapes of an object, the amount of force placed upon it, and the direction of that force.

The researcher say that there are 38 opposing motors that control the hand"s joints, giving it a touch that ranges from light to forceful.To model the robot hand, the researchers utilised hundreds of MRI images of human hands.The researchers hope that they can improve the robot"s understanding of movement and sensation thorough its neural network, reports TechnologyReview.com.They say that the robot will be able to sense the properties of an article as and when it picks it up, and adjust its motions in accordance with what it contains—such as a cup containing water or flour.Started in 2006, Sensopac is a four-year project focused on creating an artificially intelligent robot with sophisticated hand manipulation and grasping abilities.
“Hollywood did a bad job for us,” says Patrick van der Smagt, the coordinator of SENSOPAC, an EU-funded project whose goal is to create a robotic arm, hand and brain with human-like physical and cognitive capabilities.
While the movies have convinced many people that humanoid robots, such as C-3PO or WALL-E are realistic, van der Smagt knows all too well how difficult it is to build robots with even basic human abilities.
Yet robots that could function flexibly and safely alongside people in everyday environments could revolutionise daily life.
Existing robots, such as those that help assemble cars or computers, can perform repetitive actions quickly and precisely. However, says van der Smagt, “they are not very intelligent or flexible and they don’t do very much sensing”.
The international team of neuroscientists and roboticists that he leads decided that the best way to make a robot that is intelligent, flexible and sensitive is to model it on the human body and brain.
This approach, called biomimetics, is inspired by the realisation that evolution has provided the human body and brain with an astonishing range of abilities. “We can run for hours, yet also perform very high precision tasks,” says van der Smagt. “If you compare that to any robot system, it’s oceans apart.”
After two-and-a-half years of research, and €6.5 million in funding by the EU’s Sixth Framework Programme for research, SENSOPAC scientists have designed and tested a human-like arm with a dextrous and sensitive hand, controlled by a computer program inspired by the human cerebellum.
Sensitive skin
Every step towards this accomplishment required groundbreaking research by the 11 partners in the consortium.
To develop robotic skin as sensitive as human skin, the researchers started by studying how human skin senses not just pressure and position but features such as the direction pressure is coming from.
To mimic the skin’s sensing capabilities, researchers at the German Aerospace Centre (DLR), guided by physiology results from Umeå University, in Sweden, created a thin flexible material filled with a form of carbon whose resistance changes with pressure. This approach let them combine information from sensors in different parts of the skin in order to minimise the number of information-carrying wires.
“We can soon integrate hundreds of detector elements and get the information out with just five wires,” says van der Smagt. “And we have the ability to distinguish between shape, the amount of force, and the direction of force.”
The human arm and hand can generate and control a remarkable range of force, from the delicate touch of a watchmaker to the power of a javelin thrower. Much of this range of force and finesse comes from the pairs of opposing muscles that control each joint.
Researchers at DLR took the same approach. The artificial arm they built and are now experimenting with uses a total of 58 motors in opposing pairs, coupled with non-linear springs, to control the arm.
The hand they have built is closely modelled on the human hand. It can snap its fingers, pick up an egg or carry a cup of coffee. Its fingers are moved by 38 opposing motors.
Again, the researchers had to go back to basics, for example making detailed MRI studies of human hands in hundreds of different positions.
“Surprisingly enough, this doesn’t exist anywhere else,” says van der Smagt.
How to build a brain
From the start, the group knew that sensitivity, dexterity, and strength were not enough. They had to provide the biomimetic arm with a high degree of intelligence.
Their ultimate goal is to create a microchip that will allow the arm to carry out tasks requiring human-level skills in a real-world setting.
Van der Smagt envisions an arm that could “decide” to pick up a cup, sense important properties of what it contains, for example water versus flour, and move it from place to place.
“It’s not that the system needs to know that there’s water in the cup,” says van der Smagt, “but how to handle whatever is in it appropriately.”
Scientists at the University of Edinburgh, in Scotland, and at Lund University, in Sweden, decided that the best approach was to model the human cerebellum.
The cerebellum is a fist-sized organ at the base of the brain that coordinates sensation and movement.
The researchers are currently using software to simulate important aspects of how the cerebellum processes and integrates information.
“It’s the first neural-network-based controller that can control the dynamics of a robotic system in its full operational range,” says van der Smagt.
In the next six months, they will be seeing how well this system can learn to control the arm.
Although he is excited by the group’s progress towards a robotic arm and hand with human-like capabilities, van der Smagt remains impressed by what nature has already done.
“It makes one realise that we are still light-years away from achieving what biology has accomplished,” he says. “We are definitely not there yet, but we are getting much closer.”
Posted by Unknown at 1:24 PM