Dark Energy :The most direct signal of dark energy? 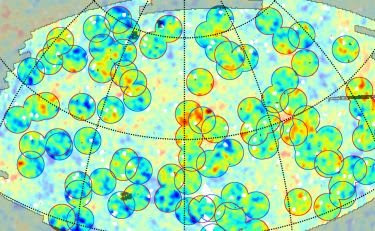 Adding the cosmological constant to cosmology's standard FLRW metric leads to the Lambda-CDM model, which has been referred to as the "standard model" of cosmology because of its precise agreement with observations. Dark energy has been used as a crucial ingredient in a recent attempt[3] to formulate a cyclic model for the universe.

It makes up some three-quarters of the mass–energy content of the universe and it’s responsible for cosmic acceleration, but that’s about all we know about dark energy. So what should we make of a bold claim for the “most direct” signal of dark energy yet? physicsworld.com roots out all the answers.

So who’s making the claim?
A group of astrophysicists led by István Szapudi at the University of Hawaii. They have analyzed the glow of microwave photons emanating from space to see how the size of massive galaxy “superclusters” changes over time. If our universe is flat — and observations suggest this is indeed the case — Einstein’s theory of gravity predicts supercluster size should stay the same. However, the Hawaii researchers have found that the superclusters are being stretched apart — the hallmark of repulsive dark energy.

This doesn’t happen everyday, especially for theorists like us who mainly deal with abstract mathematical concepts
István Szapudi, University of Hawaii
How do they analyze the photons?
The microwave photons in question, known as the cosmic microwave background (CMB), have permeated the entire cosmos since matter and radiation first “decoupled” some 380,000 years after the Big Bang. In fact, the glow of the CMB is so regular that astrophysicists can use it to illuminate the dynamics of large structures like galaxy clusters and superclusters. Taking data from a galaxy catalogue called the Sloan Digital Sky Survey, Szapudi’s team plot the location of superclusters on a map of the CMB. They can then compare how the CMB map looks in regions where there are superclusters with regions where there is empty space, or supervoids.

How does the comparison show that the superclusters are being stretched?
In the same way you gain gravitational potential energy as you walk up a hill, a photon gains energy when it is fronted by the huge jump in gravity of a supercluster. One might think that the photon loses the same energy when it leaves the other side. However, if the supercluster is stretched as the photon is passing through, the photon will experience a smaller change in gravity when it leaves than when it arrived. In other words, the photon will get to keep a token of its extra energy. Szapudi and his colleagues look out for these slightly more energetic photons by monitoring temperature. The difference isn’t big — only about a millionth of a Kelvin.
Is Szapudi’s team the first to see this extra energy?
No. The phenomenon is called the Integrated Sachs–Wolfe (ISW) effect, and the idea of using it to look at the dynamics of superclusters was first proposed by cosmologists Rob Crittenden and Neil Turok while they were at Princeton University in 1995. Since then a handful of astrophysicists have taken up the challenge, including teams led by Bob Nichol and Crittenden of Portsmouth University in the UK, Enrique Gaztanaga of the Institute of Space Sciences in Spain and Nikhil Padmanabhan of Lawrence Berkeley Laboratory in the US. In the past few years these teams have detected the ISW effect with increasing confidence.

2008 is the coming of age for the Integrated Sachs–Wolfe effect
Bob Nichol, Portsmouth University
Is Szapudi’s team now even more confident?
Well, it’s not so much the statistical confidence that’s a big deal — they claim to detect the ISW effect at just above four sigma (or 99.9995% certainty), which is in the same league as other confidence values reported this year. The important aspect of the Hawaiian researchers’ work is that they have focussed their attention on a single sample of the biggest superclusters and supervoids. The result is a cleaner, less noisy signal that is more trustworthy. In the words of Szapudi: “…We were ecstatic. It is a very subtle and small effect, and this was the first time we could actually see it, which is very different from detecting it from more abstract statistics.”

So why is it the most direct signal of dark energy?
There are many ways to infer dark energy, but almost all rely on large-scale effects and, arguably, unproven assumptions. For example, cosmic acceleration (and hence dark energy) was originally discovered in 1998 by looking at the receding light of distant supernovae, yet the precise mechanism behind a supernova explosion itself is unknown. Few doubt the dark-energy interpretation of those supernovae observations now, of course, but that’s mostly because they have been corroborated time and time again using other techniques. Observations of the ISW effect are part of that corroboration also, but are “direct” in the sense that they relate to the growth of individual structures.


Photon temperature of voids (left) versus clusters (right)
What’s been the reaction to the work?
Szapudi for one is pleased. After he had convinced himself that the results were real in February this year, which was about the time of his 42nd birthday, his team offered him a jelly birthday cake in the shape of a hot and cold spot in the CMB (see figure above). Celebrations aside, Nichol of the Portsmouth group thinks the Hawaiian team has presented “perhaps the most complete analysis” of the ISW effect to date. Nichol also describes 2008 as the “coming of age” of the ISW effect because groups working on the ISW effect now agree over the strength and reliability of the data.

So what’s next for the ISW effect?
Until more precise galaxy surveys come out, which will probably be sometime next decade, all’s pretty much done and dusted from the astrophysicist’s point of view. Theorists, however, can have endless fun examining the analyses by Szapudi and others to try and get a better grip on the nature of dark energy. Current opinion seems to be veering in favour of a “cosmological constant” which manifests as a vacuum energy, although there are several other options. One is that Einstein’s theory of gravity — general relativity — is not 100% complete and needs to be tweaked to account for cosmic acceleration. The ISW effect is particularly good for testing such “modified gravity” theories because it looks specifically at the apparent strength of gravity on large scales.
Posted by Unknown at 1:27 AM