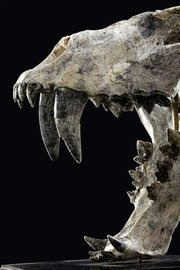 Venezuela has found the first fossils of an extinct scimitar cat -- of the saber-toothed cat genus -- in South America, during oil prospecting activities southeast of Caracas, paleontologists announced.
"It's South America's most important discovery in 60 years," Venezuelan Institute of Scientific Investigation paleontologist Ascanio Rincon told AFP on Monday.
He said fossils of six scimitar cats, or Homotherium, were found along with those of panthers, wolves, camels, condors, ducks and horses, all from about 1.8 million years ago, by a Petroleos de Venezuela team looking for oil in Monagas state in 2006.
The most important find, he said, was the complete skull of a scimitar cat, an animal never before found in South America.
"For us it's a milestone and opens a window to the past."
The scimitar cat, a smaller version of the saber-toothed tiger with a hyena-like appearance and smaller, crenelated teeth, was believed to have only inhabited Africa, Eurasia and North America between five million and 10,000 years ago.
Rincon estimated the scimitar cat became extinct in South America about 500,000 years ago.
He said the finding proved the scimitar cat shared the same habitat with the saber-toothed tiger in South America. Saber-toothed tiger fossils have been found in both North and South America.
Rincon said the fossil find would expand his research into the lifestyle of the extinct big cats
Posted by Unknown at 4:34 PM