THE BERMUDA TRIANGLE : The Unexplained matter 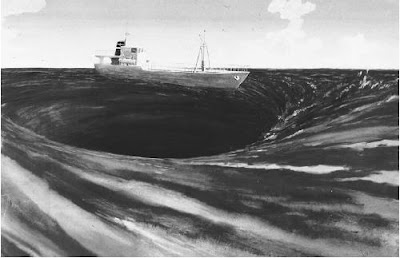 Bermuda Triangle
The Bermuda Triangle, also called the Devil's Triangle, is an imaginary area that can be roughly outlined on a map by connecting Miami, Florida; San Juan, Puerto Rico; and the Bahamas, an island chain off the coast of the United States. Within that triangular area of the Atlantic Ocean have occurred a number of unexplained disappearances of boats and planes. Additionally, readings on directional devices do not operate normally inside the triangle.
Unusual events in that area date back in recorded history to 1493 and the first voyage of Christopher Columbus (1451–1506) to the New World. In his log, Columbus noted that his compass readings were askew within the area now called the Bermuda Triangle, and he and his crew were confused by shallow areas of sea with no land nearby.
The term "Bermuda Triangle" was first used in an article written by Vincent H. Gaddis for Argosy magazine in 1964. Gaddis claimed that several ships and planes had disappeared without explanation in that area. The article was expanded and included in his book, Invisible Horizons: True Mysteries of the Sea (1965), where he described nine mysterious incidents and provided extensive detail. Many newspapers carried a story in December of 1967 about strange incidents in the Bermuda Triangle after a National Geographic Society news release brought attention to Gaddis's book. The triangle was featured in a cover story in Argosy in 1968, in a book called Limbo of the Lost (1969) by John Wallace Spencer, and in a documentary film, The Devil's Triangle, in 1971. Charles Berlitz's 1974 bestseller The Bermuda Triangle marked the height of the disaster area legend, but some of its sensationalized claims were quickly proved inaccurate.
As early as 1952, George X. Sands had noted in a report in Fate magazine that an unusually large number of strange accidents had occurred in the region associated with the Bermuda Triangle. That many of the accidents in the area are intriguing, and that the area does have some natural conditions that sailors and pilots need to be aware of, has not been challenged. However, neither statistics nor documented evidence indicates that the number of accidents is unusually high or without explanation.
In March 1918, during World War I, the USS Cyclops vanished in the Bermuda Triangle. That ship may have been a casualty of war, but the December 1945 disappearance of Flight 19, a training squadron of five U.S. Navy torpedo bombers, became the most notorious of disappearances associated with the Bermuda Triangle. The squadron left Fort Lauderdale, Florida, with 14 crewmen and disappeared after radioing in several distress messages. A seaplane sent in search of the squadron also vanished. Those two airplane disappearances were frequently cited as the Bermuda Triangle legend grew during the 1960s and 1970s.
Few of those stories included telling details. All of the crewmen of Flight 19 were in training, for example, except for their patrol leader, who had tried to withdraw from his flight duty that day because he was feeling ill. After his compass malfunctioned soon into the flight, the flight leader decided to navigate by land-marks below on the islands of the Florida Keys, with which he was familiar. Visibility became a problem because of a sudden storm, and the leader became disoriented. Flight 19 was still in radio contact with the Fort Lauderdale air base, but after some mechanical difficulties they failed to switch to an emergency frequency. Radio recordings indicate that some of the crew believed they were heading out over the Atlantic Ocean, instead of the Gulf of Mexico as their leader reported.
A search plane took off and was claimed to have disappeared into the Bermuda Triangle with Flight 19. The plane actually blew up 23 seconds after takeoff. Wreckage from Flight 19 has never been recovered.
Other aircraft that have disappeared in the area include a DC-3 carrying 27 passengers in 1948 and a C-124 Globemaster with 53 passengers in 1951. Among the ships often listed among the mysteriously disappeared are the Mary Celeste (1872), the Marine tankership Sulphur Queen with 39 men aboard (1963), and the nuclear-powered submarine Scorpion with a crew of 99 (1968). The Mary Celeste entered the list of supposed Bermuda Triangle mysteries many decades after its odd tragedy. The ship set sail from New York to Genoa, Italy, but was found sailing unmanned some 400 miles off course, off the coast of Africa. Personal articles of the crew were found and food storage areas showed no sign of upheaval. A tattered sail and a missing lifeboat suggested the boat had encountered a storm, but the ship's log, in which information was recorded as late as nine days before the ship was found, made no mention of any kind of catastrophe.
There is no evidence, however, that the Mary Celeste ever entered the area of the Bermuda Triangle. Still, the eerie, unanswered questions concerning its fate are often cited by those who attribute a malevolent force as being responsible for odd and tragic events of the triangle.
Nevertheless, there are many documented disappearances that occurred within the triangle. They include a four-engine Tudor IV air-plane lost in 1948, with 31 aboard; an American freighter, the SS Sandra (1952), which sunk without a trace; a British York transport plane, disappeared in 1952, with 33 aboard; a U.S. Navy Lockheed Constellation airplane, vanished in 1954 with 42 aboard; a U.S. Navy seaplane, 1956, with a crew of 10; a French freighter in 1970; and a German freighter, Anita, lost in 1972 with a crew of 32.
Theories about why so many air and water ships disappeared in the Bermuda Triangle involve strange magnetic fields, time warps, the lost continent of Atlantis, and alien abduction. Other proposed explanations include physical forces unknown to science, a "hole in the sky," and an unusual chemical component in the region's seawater. Several books have suggested that an intelligent, technologically advanced race living in space or under the sea has been responsible for jamming equipment and leading ships and planes to disaster.

DEZSO STERNOCZKY/SUFOI)
Many books and articles play up mystery angles concerning vanished ships by depicting the disappearances as having occurred in calm weather and daylight. Such particulars of Flight 19 as an inexperienced crew, a faulty compass, a squadron leader who failed to follow instructions, and conditions of deteriorating weather and visibility are often not mentioned. Larry Kusche, a librarian at Arizona State University, examined claims of mysterious disappearances and recorded evidence from each example. The results, published in The Bermuda Triangle—Mystery Solved, showed that many of the accidents happened during raging storms, or were later explained.
The area known as the Bermuda Triangle is one of the two places on Earth where a magnetic compass does point towards true north, a phenomenon called compass variation. Navigators must compensate the amount of variation or the craft they are on will go off course. A region commonly called the "Devil's Sea" in the Pacific Ocean is the other area of compass variation.
The Gulf Stream that runs through the Bermuda Triangle area is swift and turbulent, and can quickly erase evidence of a disaster. The unpredictable Caribbean-Atlantic weather can suddenly change into thunderstorms or create waterspouts. Many short and intense storms build up quickly and dissipate quickly, undetected by satellite surveillance. The ocean floor has shoals around islands as well as some of the deepest marine trenches in the world. The interaction of the strong currents over reefs promotes a constant flux and the development of new, uncharted navigational hazards.
These factors can confuse even experienced sailors. A large number of pleasure boats travel the waters between Florida's coast and the Bahamas. The U.S. Coast Guard receives more than 8,000 distress calls per year, averaging more than 20 per day from that area, often from sailors who have run out of gas.
The Bermuda Triangle claimed more than 1,000 lives during the twentieth century. That averages to about 10 per year, a figure similar to other areas of high water traffic or volatile