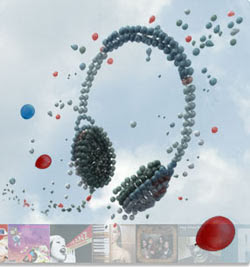 If you needed any further confirmation that DRM copy protection on digital music is on its way out, Rhapsody just provided it. The download service just opened the doors on its MP3 store, selling copy-protection-free songs — encoded at a close-to-CD-quality 256 kbps bit rate — that you can copy over and over to iPods, PCs, CDs or any other nutty music-playing contraption or media you can think of. The first 100,000 people who sign up before July 4th will get a free album, and you can even download to your phone if you have Verizon service.
Great to see Rhapsody follow Amazon in dissing DRM. We certainly welcome a future where we can finally do what we want with the music we buy. Why does anyone still buy from iTunes again.
Another Story: Rhapsody to Challenge iTunes by Embracing the iPod

The songs will be sold in MP3 format, which means users of the Rhapsody service will be able to play them on iPods.

Before now Rhapsody, jointly owned by Real Networks Inc and Viacom Inc's MTV Networks, had focused on a subscription service, allowing unlimited song streaming for $13 to $15 a month, rather than selling downloads.

But Rhapsody Vice President Neil Smith said the fact the service has not been compatible with Apple Inc's top-selling iPod digital player has limited Rhapsody's reach.

"We're no longer competing with the iPod," Smith said. "We're embracing it."

Rhapsody also will be the music store back-end to MTV's music Web sites and iLike, one of the most widely used music applications on social networking site Facebook.

Rhapsody will be available on mobile phones via the Verizon Wireless VCAST Music service. Buyers of a song over-the-air directly from phones also will be able to download that song to their computer. Verizon Wireless is a joint venture of Verizon Communications Inc and Vodafone Group Plc.

Rhapsody executives describe the strategy as "Music Without Limits." They said it would be backed by a marketing blitz worth up to $50 million in media space over the next year in part by leveraging co-parent MTV's TV networks and Web sites.

Last month digital music service Napster Inc launched an MP3 store. Both Wal-Mart Stores Inc and Amazon.com Inc launched stores last year.
Its success has been due partly to a seamless interface between iTunes and the iPod and because it provides a good user experience, said analyst David Card of Jupiter Research.
The new digital MP3 stores have been made possible because the four major record groups last year started to experiment with allowing retailers to sell music without digital rights management (DRM) software to prevent illegal sharing of music.

"I think we'll see retailers begin to compete the way they usually compete with pricing, merchandising and promotions, rather than due to some arbitrary technology," Card said.

Copyright 2008 Reuters News Service. All rights reserved. This material may not be published, broadcast, rewritten, or redistributed.


None of the new stores has made much of a dent on Apple's lead. Early this year iTunes became the biggest music retailer in the United States. It has sold more than 5 billion songs since it launched in 2003.
Posted by Unknown at 8:22 PM