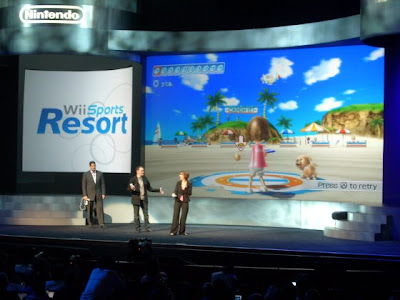 To truly understand how Wii revolutionizes gaming, you have to try it for yourself. Quite simply, Wii is for everyone. The ease of use and interactivity of the Wii Remote and Nunchuk allow for a unique social gaming experience for the whole family. You don't just play Wii, you experience it.

NPD has released its analysis of June's retail activity, and the industry's sales numbers continue to skyrocket with $1.69 billion in game sales, $615 million spent on consoles, and $202 million from accessories. "The video games industry continues to perform in the face of an ever-increasingly difficult economic environment as many turn to more in-home entertainment," said Anita Frazier, industry analyst for NPD. "Even if growth slows over the back half of 2008, the industry is poised to achieve record-breaking revenues of over $22B for the year."

Related StoriesNintendo Wii outsells 360, PS3, PS2, PSP combined in April
Nintendo proclaimed at E3 that when the NPD numbers were released, the Wii would become the best-selling console of this generation, and to the surprise of no one, that prediction came true.

Nintendo
Given that the Wii has consistently dominated sales over past months, it isn't terribly surprising to hear that the console has officially racked up the largest installed base in the US. According to Frazier, "The Wii has taken the lead in total sales of current generation console hardware at 10.9 million units sold at retail life-to-date in the U.S."

Despite the fact that the Wii has outsold the 360 as well as the PS3 with a total of 666,700 units sold, June's console of choice was actually the DS, with 783,000 purchased. The DS's strong sales might have had something to do with Guitar Hero On Tour, which sold 442,300 copies and took the number two position in software sales

While no one is surprised to hear that Wii games are showing robust sales numbers, it's somewhat shocking to hear that Wii Play is still a top-seller on the console, having moved 346,100 copies in June. "Wii Play continues to achieve an attach rate of over 50 percent to every new Wii hardware system sale," said Frazier. "I can't think of another game that has ever had that kind of performance after 16 months at retail." Also on the list was Wii Fit with 372,700 units, Mario Kart Wii with 322,400 units, and Lego Indiana Jones with 294,500 on the Wii and 267,800 units on the DS.

With both of their consoles dominating the competition by leaps and bounds, as well as taking six of the top ten slots for game sales, it would seem that Nintendo is continuing its domination of the gaming world.

Sony, of course, saw a huge surge in console sales thanks largely to Metal Gear Solid 4: consumers snapped up 405,500 units in order to play what could already be the system's killer app. The game itself sold nearly 775,000 copies— not including the new MGS4/PS3 bundle being pushed at retail—taking the number one slot on June's top ten games list. "Platform-exclusive content usually fuels hardware system purchases, and PS3 sales certainly reflect the impact of Metal Gear Solid 4," said Frazier. "PS3 unit sales were the highest of any month outside of that recorded during previous November/December holiday timeframes."

Meanwhile, the PSP came in fourth with 337,400 sold, outselling the 360 by over 100,000 units; the PS2 sat in last place with 188,798 units sold. While no other PS3 games were amongst the top ten games, Lego Indiana Jones for the PS2 managed to take tenth place with 260,300 copies purchased. That PS2 games are still breaking onto the top ten list proves "mass-friendly titles are a perfect fit for the still healthy PS2 platform."

Microsoft
Having been surpassed by the PSP, the Xbox 360 sat in fifth place for June, having only moved 219,800 systems. Combined with the fact that the 360 version of Grand Theft Auto IV has fallen completely off the top ten list, Microsoft's sales seem less than stellar. Ninja Gaiden II and Battlefield: Bad Company took the third and sixth software slots, with respective sales of 372,700 and 346,800.

While no one did poorly in the month of June, and the industry continues to show amazing growth as consumers buy games and consoles in huge numbers, Nintendo's ascent to the number one slot in the race for US supremacy is now official.
Posted by Unknown at 8:55 PM