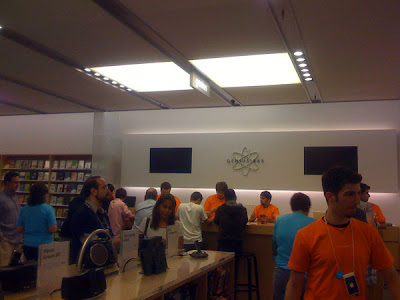 The new iPhone with fastest data processing compilable with all the cool new toys and productivity tools.at a local Apple retail store early this morning to experience the first-day iPhone 3G launch and new activation process. What follows is a comprehensive set of notes covering the process for those customers who'll be picking up their new iPhone later today, this weekend, or sometime thereafter.

The new App Store has unleashed a slew of great new apps for the iPhone, but there are still a few standard features we wish Apple's multimedia phone had. Here's the short list.

Despite being fairly standard on most multimedia phones, MMS capabilities aren't part of the 3G iPhone's bag of tricks. That said, you can e-mail photos taken with the iPhone's 2-megapixel camera (or photos stored on the device). You can also share YouTube links directly from the iPhone's YouTube application. So why is MMS missing? It could be tied directly to the 3G iPhone's lack of a video camera; you can't share video files if you can't shoot or store it natively on the device. As for music, iTunes' strict limitations on sharing music are probably the reason behind that, but it would at least be nice to have audio-sharing capabilities for non-DRM-protected tracks. 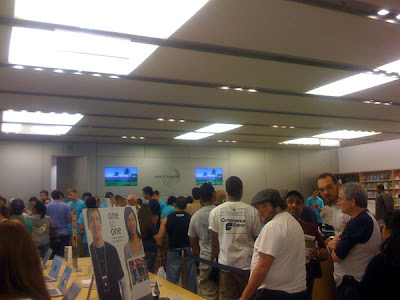 You've got to love the fact that the new iPhone no longer requires an adapter or headphones designed for its recessed headphone jack. But what about cutting the cable altogether? Unlike the latest BlackBerry, Windows Mobile, and Symbian mobile platforms, the latest iPhone still doesn't offer the convenience of using a stereo Bluetooth headset to listen to its on-board iPod, at least not without using a bulky adapter. For such a common feature, and for a company so aesthetically inclined, that's more than a little surprising.

Apple fixed a few of the first-gen iPhone's shortcomings with the early-2008 firmware update (sending text messages to more than one recipient, for example), but they didn't add an option to edit text by selecting passages and copying and pasting them elsewhere in an e-mail message or note. And with the new iPhone firmware, they still haven't. This missing feature is more than a little annoying for those who write more than talk, want to copy and paste long strings from URLs, or fix links that get truncated in e-mail messages.

Another annoyance for writers--and a confusing omission, given the capability of the iPhone's on-screen keyboard to flip horizontally for some applications but not for others--is the fact that the touch-screen keyboard doesn't rotate to a landscape orientation when using the Notes, e-mail, or Maps applications. Those also happen to be the three most writing-intensive apps on the iPhone, which makes the necessary one-finger hunting and pecking required by the portrait-mode keyboard all the more annoying if you use those features a lot. Over time, using your thumbs to type versus holding the phone in one hand and poking at the keys with one finger is a lot more significant than you might think.

5. Improved predictive text (or the ability to turn it off)

The iPhone's predictive text feature (where the phone "guesses" what you're going to write after you enter a few characters--to eliminate typos) does a decent job of streamlining typing. However, it has only an "opt-out" feature, which requires hitting a very small "x" to deselect the word it suggests. This is where that feature fails. The time it saves in correcting miscues sometimes pales in comparison to the frustration it causes in forcing you to repeatedly deselect words. And there's no way to turn it off or create a keyboard-based shortcut to deselect the predicted word.

Here's the first thing on the list that the new App Store's offerings fix--at least if you're an AOL Instant Messenger user. There's still no IM client preloaded onto the iPhone. That said, with e-mail, text messaging, voice calling, and a host of third-party mobile Web-based messaging offerings (Twitter comes to mind), do we really need another form of communication built into the 3G iPhone? Well, maybe a fax machine.

Sadly, no one really knows when being able to view Flash animations or films will be a reality on the iPhone. This big wish-list item for the second-gen version is still missing from the 3G handset. Even though YouTube clips are in Flash format on the Web, they've been converted to QuickTime format specifically for the iPhone-centric version of YouTube. The lack of Flash support means Safari fumbles when it comes to YouTube clips embedded in blog posts or other pages; those just show up as broken plugin icons, with no option to launch the clips in the iPhone's separate YouTube app.


Sorry, snapshooters and YouTube filmmakers. The 3G iPhone's still camera maxes out at 2 megapixels, and there's no way to shoot video with the camera. Those are limitations that no number of photography apps from the iPhone App Store will cure.

Microsoft Exchange is now supported, but there's no way to get all your messages from Yahoo, Mac.com, Gmail, AOL, and your business account all on one page, so to speak. Then again, barring excellent spam filters across all those sites, you wouldn't want that anyway.

Third-party apps to the rescue! The new iPhone has no native support for voice dialing or recording audio memos, but a few third-party apps now available via the App Store build them into the 3G handset, including Jott for iPhone, which is available for free.
Posted by Unknown at 11:51 PM