White Patches in Mars Trench Are 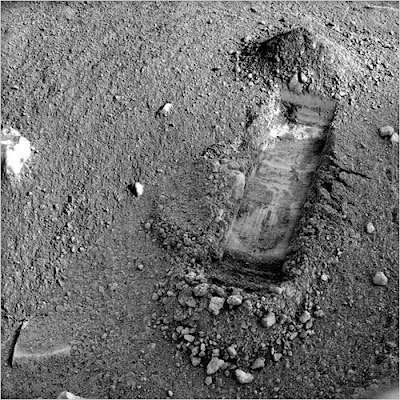 A new trench called Snow White, dug by the Phoenix Mars lander. Some white patches in the soil have shrunk.
“Follow the water!” in its exploration of Mars, NASA can finally say that one of its s.pacecraft has reached out, touched water ice and scooped it up.

Now, scientists will be able to tackle the main question they hope to answer: Did the ice ever melt and turn Mars into a habitable place?

In a photograph released Thursday evening of a trench that the Phoenix Mars lander has dug into the Martian soil, some white patches that were seen earlier in the week have shrunk, and eight small chunks have disappeared. Until now, scientists were not sure if the white material was ice or some kind of salt.

When exposed to air, water ice can change into water vapor, a process known as sublimation. Salt, on the other hand, is not capable of such a vanishing act.

“It must be ice,” said Dr. Peter H. Smith of the University of Arizona, the mission’s principal investigator. “The whole science team thinks this. I think we feel this is definite proof that these are little chunks of icy material.”

Water ice on the surface of Mars is not a new discovery. Scientists have known that the permanent ice cap at Mars’s north pole is made of ice. In 2002, measurements by the orbiting Mars Odyssey spacecraft found evidence for vastly larger quantities of ice not far beneath the surface.

In light of the Odyssey findings, the Phoenix mission was designed to land in the northern arctic plains and dig trenches in the soil into the ice layer, believed to be a few inches under the surface. Still, to actually see the ice was “tremendously exciting,” Dr. Smith said. “One of the biggest fears I’ve had on the mission is that we’d dig and dig and never find anything.”

Liquid water transforms minerals, so impurities in the ice could tell much about the climate history. While Mars is too cold for liquid water, in the past, if its axis occasionally tipped over, the polar regions might have warmed above freezing during the summer.

Liquid water is an essential ingredient for life, and this area may have been, at least intermittently, a habitable environment in Mars’s geologically recent past, in the past 10 million years or so.

One of the experiments on the Phoenix consists of tiny ovens to heat samples of the soil and analyze the vapors released. Data from the first run of the experiment, conducted over the past week, is to be downloaded from the spacecraft on Friday.

Meanwhile, digging in a different trench on Thursday, the scoop at the end of the Phoenix’s robotic arm hit a hard surface — possibly a hard icy layer — that did not yield after three efforts. The hard layer is at the same depth as the white material in the first trench.

The robotic arm has a scraper and, if necessary, a small drill to break off pieces of the hard material for analysis in one of the ovens, which would determine the chemical composition.

The eventful findings on Thursday follow a day when no science work was performed, because of a glitch with the Phoenix’s computer software.

On Tuesday, the spacecraft’s computer memory filled up with thousands of copies of housekeeping data, which prevented science data like photographs from being saved overnight, and the photographs were lost. Engineers spent Wednesday diagnosing the problem.
Posted by Unknown at 12:28 AM