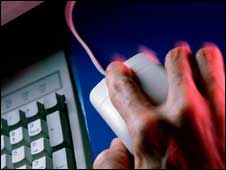 Ministers are to consider plans for a database of electronic information holding details of every phone call and e-mail sent in the UK, it has emerged.
The plans, reported in the Times, are at an early stage and may be included in the draft Communications Bill later this year, the Home Office confirmed.
A Home Office spokesman said the data was a "crucial tool" for protecting national security and preventing crime.
Ministers have not seen the plans which were drawn up by Home Office officials.
A Home Office spokesman said: "The Communications Data Bill will help ensure that crucial capabilities in the use of communications data for counter-terrorism and investigation of crime continue to be available.
"These powers will continue to be subject to strict safeguards to ensure the right balance between privacy and protecting the public.

The spokesman said changes need to be made to the Regulation of Investigatory Powers Act 2000 "to ensure that public authorities can continue to obtain and have access to communications data essential for counter-terrorism and investigation of crime purposes".
But the Information Commission, an independent authority set up to protect personal information, said the database "may well be a step too far" and highlighted the risk of data being lost, traded or stolen.
Assistant information commissioner Jonathan Bamford said: "We are not aware of any justification for the state to hold every UK citizen's phone and internet records. We have real doubts that such a measure can be justified, or is proportionate or desirable.
"Defeating crime and terrorism is of the utmost importance, but we are not aware of any pressing need to justify the government itself holding this sort of data."
'Appalling record'
A number of data protection failures in recent months, including the loss of a CD carrying the personal details of every child benefit claimant, have embarrassed the government.
The plans also prompted concern from political groups.
The shadow home secretary, David Davis, said: "Given [ministers'] appalling record at maintaining the integrity of databases holding people's sensitive data, this could well be more of a threat to our security than a support."
Liberal Democrat home affairs spokesman Chris Huhne called the proposals "an Orwellian step too far".
He said ministers had "taken leave of their senses if they think that this proposal is compatible with a free country and a free people".
"Given the appalling track record of data loss, this state is simply not to be trusted with such private information," said Mr Huhne.

Posted by SANJIDA AFROJ at 8:08 PM