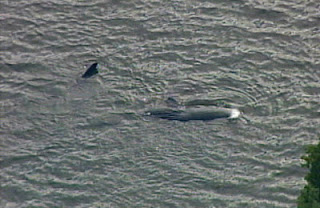 Officials with the Florida Fish and Wildlife Conservation Commission, Mote Marine Laboratory and the National Oceanic and Atmospheric Administration, as well as a University of Florida veterinarian, are monitoring the whale's movements and condition.

This may be a young whale, said Laura Engleby, a marine biologist with the NOAA Fisheries Service. Male adult sperm whales can be 60 feet long, and female adults can be 40 feet long.

Sperm whales are the largest toothed whales in the world and have been known to live seven decades.

According to the NOAA Fisheries Web site: "The sperm whale was listed as endangered throughout its range on June 2, 1970 under the Endangered Species Conservation Act of 1969 (35 FR 8495) and is also protected under the Marine Mammal Protection Act of 1972."
More

PALMETTO - A 25- to 30-foot sperm whale that has been stuck in shallow water near the mouth of Tampa Bay likely will have to be euthanized, officials said Monday.

The whale has drifted from Pinellas County to waters near Terra Ceia Bay but showed no signs of going out to deeper waters, said Nadine Slimak, a spokeswoman with the Mote Marine Laboratory in Sarasota.

Officials were able to give the whale a sedative on Monday and determined it had no obvious injuries. When it gets closer to the coast, biologists will euthanize the whale, which is likely an older juvenile, Slimak said.

That decision could be overturned if the whale swims toward deeper waters, but Slimak said its condition seems to be declining. At one point on Sunday, it became stuck on a sandbar, and has remained in waters as shallow as four feet deep, Slimak said.

Sperm whales are the most common type of large whales found in the Gulf of Mexico, but they tend to stay farther out to sea. Sightings near the Florida coast are rare, and are usually an indication the animal is in distress.
Posted by SANJIDA AFROJ at 6:43 PM