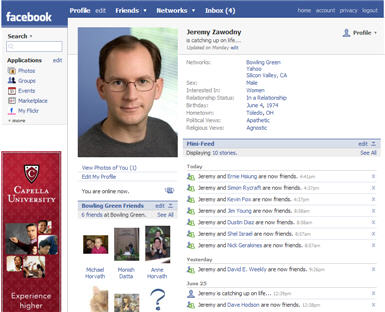 The Tel Aviv-based maker of software to secure networks against intrusions said "secret crush" is a new software program distributed through Facebook which allows third-party software vendors to plug applications into the Web site.

about Facebook
Facebook - The Complete Biography
is the second largest social network on the web, behind only MySpace in terms of traffic. Primarily focused on high school to college students, Facebook has been gaining market share, and more significantly a supportive user base. Since their launch in February 2004, they’ve been able to obtain over 8 million users in the U.S. alone and expand worldwide to 7 other English-speaking countries, with more to follow. A growing phenomenon, let’s discover Facebook.

The Facebook Phenomenon
First, let’s start by looking into Facebook in a broad spectrum - as the network, the phenomenon, the company, and its brand.

Originally called thefacebook, Facebook was founded by former-Harvard student Mark Zuckerberg (while at Harvard) who ran it as one of his hobby projects with some financial help from Eduardo Saverin. Within months, Facebook and its core idea spread across the dorm rooms of Harvard where it was very well received. Soon enough, it was extended to Stanford and Yale where, like Harvard, it was widely endorsed.

Before he knew it, Mark Zuckerberg was joined by two other fellow Harvard-students - Dustin Moskovitz and Chris Hughes - to help him grow the site to the next level. Only months later when it was officially a national student network phenomenon, Zuckerberg and Moskovitz dropped out of Harvard to pursue their dreams and run Facebook full time. In August 2005, thefacebook was officially called Facebook and the domain facebook.com was purchased for a reported $200,000.

Unlike its competitors MySpace, Friendster, Xanga, hi5, Bebo, and others, Facebook isn’t available to everyone — which explains its relatively low user count. Currently, users must be members of one of the 30,000+ recognized schools, colleges, universities, organizations, and companies within the U.S, Canada, and other English-speaking nations. This generally involves having a valid e-mail ID with the associated institution.

A large number of surveys and studies have been conducted around Facebook - some with interesting results. For instance, according to an internal September 2005 survey, approximately 85% of the students in the supported colleges had a Facebook account, with 60% of them logging in daily. A survey conducted by Student Monitor revealed Facebook was the most “in” thing after the iPod and tying with beer, and comScore Media Metrix discovered users spend approximately 20 minutes everyday on Facebook. Another 2005 survey said 90% of all undergraduates in the U.S. use either Facebook or MySpace regularly, and a detailed questionnaire analysis by Chris Roberts revealed that 76.2% never click on its ads. Perhaps the most amazing statistic of all may be that Facebook is the 7th most trafficked site in the U.S.

Given the situation other social networks on the web are facing, Facebook is in a good position financially. While it hasn’t managed to get acquired like its rival MySpace (despite some rumors about an $800m deal with Viacom), it’s been quite lucky in most aspects. For its initial funding, it received $500,000 from Peter Theil, co-founder of PayPal. A few months later, it was also able to get $13 million from Accel Partners, who are also investors in 15 other Web 2.0 startups, and $25 million from Greylock Partners, making their overall venture equal to approximately $40 million.

For users, Facebook’s core service is completely free and ad-supported. In fact, in August 2006 Facebook signed a three year deal with Microsoft to provide and sell ads on their site in return for a revenue split. The deal followed an announcement from Facebook’s direct competitor MySpace who signed a similar deal with Google. The youthful demographic that both the services attract is highly prized amongst advertisers and should return a good amount of revenue for both the services to stay alive - and profit. Another deal which made news in July was Facebook’s agreement with Apple to give away 10 million free iTunes samplers to Facebook users. A deal has also been signed to provide Facebook credit cards.

In its early days, Facebook faced an extremely threatening lawsuit from ConnectU, a very similar social network which - like Facebook - shares its roots back to Harvard, and as a result almost got shutdown. The founders of ConnectU alleged that Facebook’s founder Mark Zuckerberg stole source code while he was in their employment. Zuckerberg denied the allegation and the lawsuit was dismissed.

Facebook has also been host to other issues and concerns, especially in the privacy sector where its privacy policy states “Facebook also collects information about you from other sources, such as newspapers and instant messaging services. This information is gathered regardless of your use of the Web Site.” Another theory is that Facebook could also be a data-gathering project or if not, used extensively for these purposes. Facebook’s policy also states that it “may share your information with third parties, including responsible companies with which we have a relationship.”

The Service
Now, let’s look into Facebook - the service itself, and some of its features, highlights, and the things that got Facebook where it is today.

A typical Facebook profile consists of a number of different sections, including Information, Status, Friends, Friends in Other Networks, Photos, Notes, Groups, and The Wall. Most of the sections are self-explanatory but some are specific to Facebook.

Facebook Photos
With over 1.5 million photos uploaded daily, one of Facebook’s most popular features has been the ability to upload photos. Users can upload unlimited photos from their cell phone or through its Java-based web interface. Facebook is one of the few services to offer an unlimited quota with their only restriction being a 60-photos-per-album limit - this is much appreciated by Facebook’s college demographic.

The process of uploading photos is very simple. Users create albums which they can assign limitations to (e.g. visible to my friends only) and upload photos within them. The album is then put into their profile, and other users with right credentials have the ability to see and comment on them. Facebook also gives the feature to share the photos with a simple web link or send them via AIM or by e-mail. What’s more, users can also order prints online through a simple integrated interface.

Just like every other social network, Facebook has something called ‘groups.’ Users can create new ones or join and participate in existing ones. This is also displayed in their profile and is a good indication of hobbies and interests a person might have.

There are two kind of groups, a normal group and a secret group, which isn’t shown on the profile. A normal group is just like any other, but users can also create and invite others into secret groups. These can be used for collaborating on university projects, and provide a way to have closed discussions. About 80% of the groups are ‘fun-related’ and companies can even sponsor groups - as is the case with, for example, the Apple users group.

Facebook Events
Another Facebook success is their ‘events’ feature, which provides the ability to organize, be part of, and plan for events. This feature has been extremely successful when it comes to organizing parties.

Along with organizing and joining events, users can also invite and recommend others to an event. This feature, however, has raised some controversy as it is generally the start of underage drinking and dry campus violations. Colleges and universities use the feature to catch planning of such events before hand and investigate those that are over. In any case, it’s one of the most popular features of the service and even beats some of the competing products made specifically for this purpose.

This is an important feature for Facebook since it makes it the first major social network to give access to its API. Although it is limited to 100,000 requests a day, it’s more than enough for a decent web app to come through. What’s more, a selection of applications have already been created. FaceBank is a promising tool which lets you ‘keep track of depts and shared expenses with friends.’ Another interesting application is lickuacious which lets you ‘rank your friends by wall popularity.’ The Wall, of course, is Facebook’s comments feature.

Facebook’s most recent addition launched in late August. The service is called Facebook Notes, and allows users to write a Facebook blog. All notes are displayed in the user’s profile, and other members can add comments.

Notes possesses an important feature, which is the ability to import and syndicate an external blog, although unlike Technorati, doesn’t allow you to claim one only to yourself (e.g. it’s possible to claim the New York Times syndication feed easily in one’s Notes). The service allows HTML to be included in the posts, although JavaScript and Flash are disabled. You can attach photos and also post via cell phone by sending your notes to notes@facebook.com. Another interesting feature is tagging - tagging a post with a username will automatically send it to that specific user. The Notes feature has been well received.

Facebook is a massively successful social networking service that grew to prominence in virtually no time. It’s not hard to see why: its features and tools are highly appealing, and Facebook users are extremely well networked in real life. Rumors of an acquisition continue to circulate, with some estimates putting the price in the billions of dollars. In the short term, however, Facebook plans to go it alone, continuing to build out one of the world’s most successful social networks.
Posted by SANJIDA AFROJ at 4:33 AM