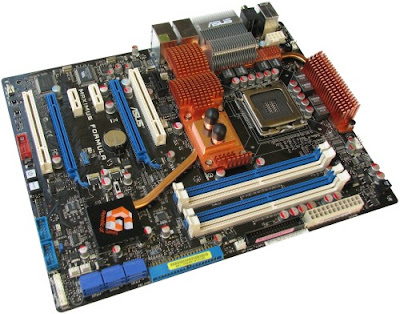 ASUS went really crazy with the Intel P35 chipset, releasing more than a dozen motherboards equipped with it in just a matter of months. As we discovered in our 9-way Intel P35 motherboard shoot-out, the P35 is a well equipped chipset that offers excellent performance, great overclocking capabilities and a very competitive price. In fact, the price of the P35 has allowed motherboard makers to produce budget versions that cost as little as $100 as well as more extreme versions that cost $400 and beyond.
The ASUS Maximus Formula Special Edition not only features the X38 chipset but packs a whole bunch of additional features that should help it stand out from competitors' X38 products.

For starters, the Maximus Formula is a water-cooled motherboard, which is no doubt an appealing feature for many many gamers and overclockers alike. It also includes the SupremeFX II soundcard which is another feature aimed at gamers, along with a software bundle of 3D FPS game S.T.A.L.K.E.R., a copy of 3DMark 06 and Kaspersky antivirus.

However, we knew all along that the Intel X38 chipset was coming and now that has landed on retail, it's supposed to take over the high-end market segment while also replacing the aging 975X chipset. Unfortunately we have found the much anticipated X38 to be a little over hyped, as it offers nothing really new when compared to the P35 chipset.

High-end boards using either chipset will make use of the ICH9R south bridge chip, meaning they boast the same features. Performance-wise the P35 is just as fast as the X38 unless you plan to run multi-GPU configurations (SLI/Crossfire) and so far we have found the P35 to overclock just as well as the newer X38, so neither chipset has an advantage there either.

Nonetheless, simply because the X38 chipset is marketed as a high-end product (and is priced accordingly) it is expected to be used on extreme motherboard offerings such as the one we have in store today.

The ASUS Maximus Formula Special Edition not only features the X38 chipset but packs a whole bunch of additional features that should help it stand out from competitors' X38 products
Posted by Md Moshiur Rahman at 3:07 AM