The pylon's move is "a daunting task," NASA will do it

NASA scientist are now facing a new challenge.NASA's about to get into the moving business.
Over the next five days, astronauts are scheduled to shift a giant power pylon from the top of the International Space Station to the station's outermost tip. It's among the most complex jobs NASA has attempted as it builds the station, a scientific laboratory orbiting about 200 miles overhead. 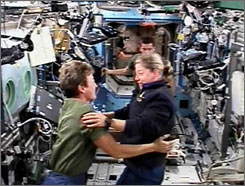 The pylon is a tower twice as tall as a football goal post and, at 35,000 pounds on Earth, as massive as a city bus. It supports solar panels to help generate electricity.

The pylon's move is "a daunting task," says Kirk Shireman, deputy chief of the station program. "We'll all breathe a little easier when we've installed it." He has a long wait before he can relax. Even if all goes smoothly, the move won't be finished until Tuesday.
Astronaut Scott Parazynski, who is doing today's spacewalk and two more, likens the task to moving a house. "We're going to power down every system, all the computers, the lights, the air conditioning," he says, and "take all that apart and move it with cranes." The "cranes" are two sets of sophisticated robotic arms.

The move and an addition of a room to the station are the main goals of the crew of space shuttle Discovery, which is at the station for an 11-day visit. Inspections of Discovery show its heat shield is in good shape, hief mission manager John Shannon said on Thursday.

The pylon was added to the station seven years ago. NASA had to fold solar panels attached to it to make room for new solar-panel pylons installed in 2006 and 2007. The location change will allow the old panels to be unfurled so they can generate electricity.

NASA has never relocated such a big item in orbit.

•Restricted vision. The pylon will be eased into place by astronauts who can't see what they're doing. They'll use the station's robotic arm, which is controlled with two joysticks, to position the pylon. But they won't have a view of the arm and its load. They'll have to rely on directions from spacewalking crewmates hovering nearby.

•Time pressure. Before the move, heaters in the pylon will be turned off. Without heat, electronics boxes on the pylon will freeze if exposed too long to the chill of outer space. So the crew can't make mistakes as they reposition the pylon and reattach its power cables.

•Uncooperative equipment. Once the pylon is moved, two spacewalkers will have to attach coolant pipes. That job is "notoriously difficult," says astronaut Dan Tani, because the pipes are so stiff. The robotic arm is also a concern. To plug the pylon into place, the arm will be stretched almost to its limits, which could make it unstable.

Despite the many things that could go wrong during the move, the astronauts express confidence that their work will be a success - and fun.