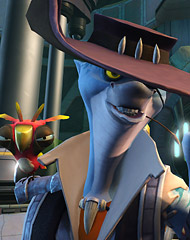 When one thinks of the leaders in computer animation, a few familiar film studios come to mind, namely DreamWorks and Pixar. Traditional movie companies like Fox and Warner Brothers have also made successful forays into animated fare.

Video games, however, have rarely been known for the artistry of their animation, for two reasons. First, while they almost inevitably fall short, most video games of any genre try to look realistic - realistic cars, realistic football players, even plausibly "realistic" dragons and aliens. But what defines great animated characters like Mickey Mouse and Shrek is not any notion of realism, but rather an exaggerated yet unthreatening expressiveness. That is one reason so few of the classic animated characters are human: anthropomorphized animals give the artist much more creative leeway.

Just as important, in those cases when designers have gone for an animated look, technology has simply not allowed games to come anywhere near the fluidity, detail and depth possible in a noninteractive film. Not to mention that game companies often undermine even brilliant graphics with lackluster voice acting.

All that is changing this week with the release of Insomniac Games' Ratchet & Clank Future: Tools of Destruction for Sony's PlayStation 3 console. The new Ratchet is a watershed for gaming because it provides the first interactive entertainment experience that truly feels like inhabiting a world-class animated film.

Ratchet is expressive and chock- full of family-friendly visual humor, delivered with a polish and sophistication that have previously been the exclusive province of movies like "Toy Story" and "Monsters, Inc." (The game is being released with a rating of E 10+, which means it has been deemed appropriate for all but the youngest children.)

In addition to its creative achievement, Ratchet may also prove important in the incessant turf battle that is the multibillion-dollar video game business. Put baldly, Ratchet is the best game yet for the PlayStation 3, which has lagged behind Microsoft's Xbox 360 and Nintendo's Wii systems in the current generation of console wars. The PlayStation 3 has more silicon horsepower under the hood than either the 360 or the Wii, but until now there has not been a game for it that seemed to put all that muscle to use.

Ratchet, however, will surely become a showcase game for Sony because, given current technology, it seems unlikely that any game for either the 360 or the Wii will be able to match Ratchet's overall visual quality.

So how did Insomniac do it, and who is this Ratchet anyway?

In the best tradition of animation, Ratchet is a mischievous yet good-hearted member of the not-quite-human, not-quite-animal Lombax species. He is covered in yellow and orange fur, and he has a tail and long, floppy ears. Clank is his sage robot sidekick, and together they traverse the galaxy defeating the forces of evil. The first Ratchet game was released in 2002; since then the series has sold more than 12 million copies. As the new game begins, the once-idyllic city of Metropolis has come under attack by the legions of the big bad guy Emperor Tachyon.

"Ratchet has always been our opportunity to push the lighter side of gaming," said Ted Price, Insomniac's chief executive and founder, in a recent interview here. "Ratchet has allowed us to make jokes on those two pop culture levels where if the kids don't get it, the parents will.

"For instance, the character Courtney Gears was a big feature in the earlier game Ratchet Up Your Arsenal. Actually, a lot of us are huge Pixar fans, and we're inspired by their work because those guys do a great job of telling stories, and we think an area where we can drive games forward is not just in the visuals but in the area of character development." (For a kick, check out clips of Courtney Gears on YouTube.)

In a conference room dominated by an immense flat-panel screen, Brian Allgeier, the creative director of the new game, explained how new technology can help create a more engaging game experience. "The Ratchet character now has 90 joints just in his face," he said, referring to the character's virtual wrinkles and bones. "On the PlayStation 2, he had 112 joints in his whole body. So now we have a lot more power to make the characters more believable and expressive."

"Ultimately we're trying to create more emotional intimacy," he said. "That's one of the things that movies do really well with the close-up, where you can really see the emotions on the character's face. But in games, so often you're just seeing the action from a wide shot behind the character you're controlling and you don't have that emotional connection. So that's what we're going for."

Like most games, the new Ratchet includes a variety of weapons, but they tend toward whimsical gear like the Groovitron. Being pursued by a pack of bloodthirsty robot pirates? Bust out the Groovitron, a floating, spinning disco ball that compels your foes to dance to its funky beats while you make a getaway.

The biggest problem with Ratchet is that at times it is so lushly compelling that you find yourself just staring at the screen, as if it were a movie, rather than actually playing the game. And that, of course, is not a bad problem at all.