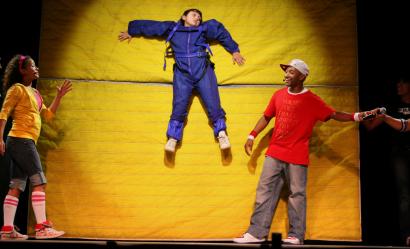 School administrators in Southeastern Massachusetts say they need to bolster scores on the state's new high school science exam, even though the majority of the region's public school districts outperformed the state average in the scores released this week.

Because passing the exam is becoming a high school graduation requirement starting with this year's 10th-graders, just doing better than the state average will not be good enough to ensure that the region's seniors all have high enough scores to get their diplomas, school administrators say.

The science exam was given for the first time this spring to ninth- and 10th-graders. Students can take the exam in biology, chemistry, physics, or engineering-technology. Under the new rules, a student must pass one of the four to get a diploma.

On biology, the most popular test, 39 of the 49 area districts where ninth- and 10th-graders took the test passed at a higher rate than the state average of 76 percent, according to a Globe analysis of state data released on Monday.

Norwell students did the best, with a pass rate of 99 percent; Randolph did the worst at 54 percent. The median pass rate for the region was 83 percent.

"We are happy when we see successful scores, but that doesn't mean we pause in the glory. We still need to continue to move forward to make all students successful," said June Doe, the superintendent of schools in Dedham where more than 90 percent of the high school students passed the biology and chemistry tests.

Because the state provided only the combined pass rates for grades 9 and 10, it is unclear how far or close this region's class of 2010 is in meeting the high school graduation requirement.

The following are highlights of the other three science tests results for the ninth- and 10th-graders:

Out of the 30 districts in the region in which students took the chemistry test, 25 outperformed the state passing rate of 61 percent. At five schools - Cohasset, Foxborough, Foxborough Regional Charter, Westwood, and Weymouth - all test-takers passed. Old Rochester and Hull tied for the lowest rate of 42 percent. The median passing rate for the region was 85 percent.

Out of the 13 districts in the region where students took the introduction to physics test, nine performed better than the state average of 78 percent. Sharon had the highest pass rate of 99 percent, while Blue Hills Regional Technical had the lowest at 15 percent. The region's median was 89 percent.

Only two districts took the engineering-technology test. Plymouth had a passing rate of 79 percent, 3 percentage points higher than the state, while Brockton had 58 percent.

To pass the exam, students need to score in the top three categories on MCAS - advanced, proficient, or needs improvement. The other category is warning-failin.

School administrators say they will offer remediation for students who did not pass the exams, but in many cases have not developed specifics. One sticking point: By the time the districts receive scores in the fall, students often already have moved onto a new science course.

So, a student who failed the biology exam but passed the biology course at the high school could now be sitting in a chemistry class, raising the question of whether it's better for the district to tutor the student in biology for a retake or devote additional help to the student in chemistry so he or she can take that state exam with better success.

"We will have to determine that on a case-by-case basis," said Brenda Hodges, superintendent of the Mansfield schools, where 92 percent of students passed the biology exam.

More broadly, administrators say they are reevaluating their science programs to make sure the courses align with state standards. A few districts said they might reshuffle the order in which students take courses, or change the length of time students have in classes.

In Carver, where 80 percent of students passed the biology exam, the high school might replace a freshman earth science course with an introductory physics class. The school would then stick with the current cycle of having students take biology in their sophomore year and chemistry in their junior year.

"We want to give more kids a chance to succeed," said Elizabeth Sorrell, superintendent of the Carver schools and a former science curriculum coordinator. "I do think the test is a good idea. Pretty much any job you do requires some science and technology."

In Walpole, where more than 90 percent of students passed the biology and chemistry tests, the high school has added another science teacher so classes are around 25 students, compared to about 30 last year.

"Students are now able to have their own lab stations in the science rooms," said Jean Kenney, director of curriculum, instruction, and grants in Walpole. "Our teachers have students focus a lot on hands-on work. We try to make it real world science. We want applications [of science] to be seen as everyday examples."

Getting students to pass the science exam comes down to one basic principle - having them practice the knowledge and skills, said Abington Superintendent of Schools Peter Schafer. "It's like hitting a baseball," Schafer said. "The more you go to the batting cage, the better you get."

The effort to improve extends beyond high schools. Many districts are revamping curriculums in middle and elementary schools, too. Administrators say it's critical to make students excited about science at the youngest age possible so they will want to keep studying it. State policy makers and business leaders say the state needs more highly trained workers for the science fields, especially in the booming biotechnology.

Quincy officials last month tried to entice fifth- and sixth-graders into a love affair with science by putting Newton's laws of motion and the universal law of gravitation to hip-hop lyrics. Students filled a school gymnasium to hear a special program put on by and NASA that demonstrated the laws by using things like rocket launchers and Velcro against the backdrop of three hip-hop singers.

The show dazzled Meghan MacDonald, 11. Although she said she loves science, she said she is unsure whether she would pursue science as a career.

"I'm thinking about working with animals," she said, "but I've always wanted to go to the moon."