In Search of Wireless Wiggle Room 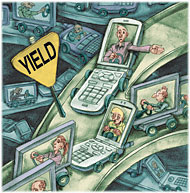 I RECENTLY watched a YouTube clip of a young man removing the memory chip from his iPhone with his teeth, in an attempt to "unlock" the device for use on a network other than the AT&T system for which the phone was exclusively sold. His gyrations were a particularly vivid reminder of the limits imposed on cellphones by the companies that run national wireless networks in the United States

But there are signs that the existing order in the wireless world may finally be changing.

This month, despite the opposition of companies like Verizon, the Federal Communications Commission reiterated that its coming auction of wireless spectrum would include rules intended to give consumers more choices in the phones they can use. These "open access" auction rules have already received considerable attention, but the commission also faces other decisions that will significantly affect the availability and the price of wireless service.

For decades, the F.C.C. has allocated almost all the prime frequencies available for communication for the exclusive use of licensees and since the 1990s, it has emphasized auctions for allocating that spectrum. Economists mostly applauded the move to the auction system, because it subjected prospective licenses to a market test: the F.C.C. no longer had to try to divine who would make the most productive use of the spectrum; the companies that were willing to pay the most at auction would win.

Not all of the spectrum is auctioned, however. Some of it is left "unlicensed" - meaning that no one has exclusive rights to it. Baby monitors, garage door openers and Wi-Fi all work on unlicensed parts of the spectrum, in a kind of free-for-all. As technology improves to prevent these devices from stumbling over one another's signals, the argument for leaving part of the spectrum unlicensed grows stronger as well.

In the past, when the F.C.C. auctioned spectrum for cellular service, it allowed the winners to determine the equipment and applications that would run on their networks. That created the current status quo, in which a vast majority of American consumers buy a handset from a wireless service provider.

The open-access rules, which will apply to about one-third of the spectrum being sold at the auction, represent a significant departure from past practice. They require the winners to let consumers use any tested, safe and compatible device or application on its network. Entrepreneurs could sell handsets with capabilities that are unavailable - or unavailable at affordable prices - from current carriers. As long as a manufacturer offered a product compatible with a network, the consumer could use that product - without needing to take measures like unlocking it with his teeth.

The spectrum in the coming auction is low frequency, which means that a signal using it could travel long distances and penetrate walls, making it very appealing for a national wireless network. Because the signal travels well, for example, fewer towers would be needed. Thus, it is possible that a new network could emerge from the auction to compete with the four existing national carriers.

Although the open-access rules could lead to innovation in devices and applications, they might not do much to increase competition among carriers. Preventing an influx of additional competition would be valuable for the big existing carriers, so they may bid aggressively enough that no new carriers will win significant licenses at the auction.

Both Google and Frontline Wireless - a start-up whose vice chairman is Reed E. Hundt, a former F.C.C. chairman - lobbied the commission to effectively force new entry into the market by imposing added restrictions on auction winners. They argued that winners should be forced to resell use of the spectrum at wholesale rates, a provision the F.C.C. did not adopt. The idea was that this spectrum could support multiple services, creating competition and driving down prices.

Having missed the opportunity to include these provisions in the coming auction, the F.C.C. will have another chance this year to create cheaper wireless broadband services. Google and other technology companies, including Dell, Philips and Microsoft, are part of a group called the White Space Coalition that is asking the F.C.C. to open up the empty space between assigned TV channels to unlicensed users and devices.

The idea would work like this: In many areas, not all broadcast channels are in use. The unused channels are "white spaces" of high-quality spectrum that could be made available to local Internet service providers. Unlike the much higher frequency of Wi-Fi, television broadcast frequencies can travel for miles and penetrate walls, providing a much broader range for Internet service. Because the unused channels vary across the country, the group proposes that consumers be able to buy generic devices, like PC cards for Wi-Fi, that would search for open frequencies and connect to a service.

Big cities tend to have many TV stations. That means there would be more white-space opportunity in rural areas, which also tend to be underserved by wired broadband services. If the plan worked, rural America could be dotted with high-speed wireless Internet service providers - like having a Starbucks on every corner, minus the coffee.

The catch? Television broadcasters argue that these services would interfere with digital television reception. The National Association of Broadcasters has run TV spots depicting doomsday - an increasingly irritated woman banging on her TV because, "if Microsoft and other high-tech companies have their way, your TV could freeze up and become unwatchable."

Interference with broadcast television wouldn't affect the more than 80 percent of television-viewing households who don't watch over-the-air TV anyway. And it wouldn't be a problem if the white-space gadgets work as intended, avoiding frequencies where there is any conflict. Unfortunately, that is not a given: a Microsoft device failed F.C.C. engineering tests earlier this year.

The F.C.C. has shown some bravery in maintaining the open-access auction rules, despite efforts to dismantle them. Now the commission needs to deal with the arguments of the broadcasters.

While there is certainly a risk that white-space Internet devices could interfere with some television signals, the potential for cheap, accessible wireless broadband is too great to pass up.

Judith Chevalier is a professor of economics and finance at the Yale School of Management.

Posted by Md Moshiur Rahman at 4:37 AM