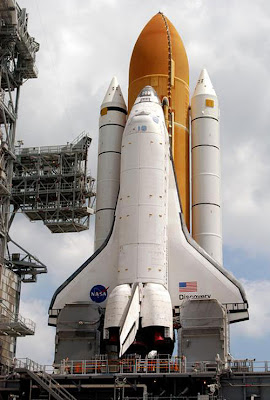 Loading the ship's external fuel tank with 500,000 gallons of liquid oxygen and liquid hydrogen began at 2:13 a.m. EDT 0613 GMT. The process was expected to take about three hours.

Discovery carries a new module for the International Space Station, which is a little more than 60 percent complete. NASA has 11 construction missions to the outpost remaining and two resupply flights before the $100 billion station is finished.

NASA needs to have the work completed within three years when the shuttle fleet is due to be retired.

The new module, called Harmony, will be the first expansion to the station's living space since 2001. It will serve as a connecting point for new laboratories owned by Europe and Japan, which are scheduled for launch in December and in 2008.

Once Discovery's fuel tank is full, a specially trained team of inspectors will head to the launch pad to scrutinize the tank for ice buildups and cracks in its foam insulation. Both ice and foam pose a serious risk to the shuttle if pieces should break off and hit the ship during liftoff.

NASA has been tweaking its launch procedures and shuttle equipment to avoid repeating the kind of damage shuttle Columbia sustained during its launch in 2003, which ended in the shuttle's breakup and the deaths of seven astronauts.

The shuttle's heat shield had been damaged by a chunk of falling tank insulation during liftoff and it failed as it flew through the atmosphere prior to landing.

For Discovery's flight, NASA carved an hour off the amount of time the tank is filled before launch in hopes of minimizing ice buildups.
Posted by Md Moshiur Rahman at 3:56 PM

Hermes handbags are spotted all over—from airports to Mommy and Me dates, celebrities are adding these prestigious bags as fashionable finishing touches to their ensembles. Coming in a close second, the Birkin is popular among the younger set, and holds its own at number two in the ratings.