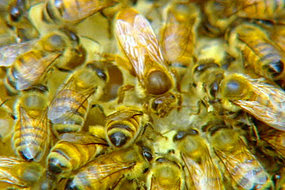 24hoursnews
The US Agriculture Department has pointed the finger at Australian bees as possible carriers of a virus that they say is causing the collapse of the honey bee industry in the United States and Europe.

The claims are likely to harm the Australian industry and could lead to a ban on the import of Australian bees.

The failure to find what has caused the honey bee crisis is an ongoing headache for the industry, which in the US is worth about $17 billion.

The name for the mysterious problem, Colony Collapse Disorder, sums up its devastating effects for beekeepers.

Daniel Weaver, the president of the American Beekeeping Federation says it is also causing alarm for producers in other industries.

"The farmers and orchardists that produce the fruits and nuts and melons and berries and all the other tasty things for the table that depend upon honey bees for pollination," he said.

The US Agriculture Department has also pointed the finger at Australian bees as a possible source.

Mr Weaver says Australian bees will not be quite as welcome in America now.

"It's likely that some beekeepers in the US who might have been contemplating using Australian bees might take a second look at that option now, wishing to avoid any excess risk," he said.

"So they may not import Australian bees that they would have otherwise imported without this report."

"We've been shipping bees to Canada for 15 years," he said.

"There's been no colony collapse in Australian bees."

Mr Taylor, managing director of Australian Queen Bee Exporters, says he has very suspicious about the claims from the US.

"I'm curious as to whether there's some hidden agenda with the local bee producers," he said.

"In Canada, we don't have local bee producers, so we're not competing against anyone, but in the US there's a large number of bee producers and we're obviously competing directly with them."

He says the credibility of the claim is questionable.

"There's a lot of unanswered questions, and the Americans choose not to test colonies that haven't collapsed to see if there's any Israeli Acute Paralysis Virus in that."

There is irony in Australian bees coming under suspicion because beekeepers in the US have relied on honey makers from Australia to keep their hives alive.

The head of the Australian Honey Bee Council, Stephen Ware, says there is no support for the theory that Australian bees are to blame for.

"I'd certainly call it dodgy," he said.

The export in bees has grown to a $5 million industry since 2004 when the US started accepting Australian imports. Mr Ware says there is a risk US authorities may now ban Australian bees.

"Every chance that potentially there could be a ban on exports, and we certainly don't believe that's warranted," he said.

"We hope that cooler heads will take charge and that the analysis will be properly examined, and will be shown to be flawed."

Despite the findings of the US report, Australian bees are being defended by a leader in the US beekeeping industry.

Mr Weaver says the virus found in an Australian bee can not be solely responsible for the crisis.

"There is a strong correlation in the data that they've presented, but I think that much more work remains to be done," he said.

CSIRO bee pathologist Dr Denis Anderson says he is highly sceptical about the claims in the US report, and so is the Australian Government.

A statement from federal Agriculture Minister Peter McGauran says any trade restrictions imposed on the basis of the research would be inconsistent with America's trade obligations, because there is not enough evidence.

The issue is sure to cause a more than a buzz when it is discussed at the World Beekeeping Congress in Melbourne next week.
Posted by Md Moshiur Rahman at 3:50 PM