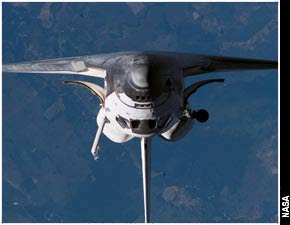 With the fix in place, engineers are continuing to prepare Endeavour for a planned Aug. 7 launch to carry on construction of the International Space Station (ISS). The shuttle and its seven-astronaut STS-118 crew are slated to lift off at about 7:02 p.m. EDT (2302 GMT) Tuesday and rendezvous with the ISS two days later.

Endeavour's faulty valve was one of two in the orbiter's crew cabin, and is designed to relieve excess air to prevent over-pressurization of the shuttle.

The successful check came after a faulty positive pressure release valve was discovered during an earlier inspection, and was replaced yesterday with one of shuttle Atlantis' working valves. Diller explained that engineers made the switch because getting a brand new valve would have taken too much time and pushed back the launch date.

Diller noted that the leak "was considerably greater" than NASA allows.

"Over time, the kind of leak we found would not have been a safe situation," he said. Diller added that the length of the current mission made fixing the leak a top priority, as reserves of air could have run dangerously low.

With the repair a success, Endeavour's STS-118 crew is expected to arrive today at KSC in preparation for next week's launch.

Commanded by veteran astronaut Scott Kelly, Endeavour's crew will deliver a fresh load of cargo, spare parts and a new starboard-side piece of the ISS during an 11-to-14-day mission. The flight also marks the first launch for teacher-turned-astronaut Barbara Morgan, who first joined NASA's ranks in 1985 as the backup for Teacher in Space Christa McAuliffe. McAuliffe and six NASA astronauts died in January 1986 when their space shuttle Challenger broke apart just after launch.

- After a week of finding, replacing and testing a crew cabin leak aboard the space shuttle Endeavour, NASA officials said a 24-launch delay has put shuttle processing back on track.

"We're back on a much more customary schedule," said George Diller, a NASA spokesperson here at Kennedy Space Center (KSC). "There's a much more relaxed atmosphere here," he said of the launch, which is now scheduled for Aug. 8 at 6:36 p.m. ET (2236 GMT).

Meanwhile, Diller said, the seven-person crew of STS-118 got the fit of their launch and entry suits checked, underwent a flight plan review, packed for the 11-to-14 trip, trained with a robotic arm simulator and crew commander Scott Kelly and pilot Charlie Hobaugh flew a shuttle training aircraft.

"They're getting into the right frame of mind and sleep cycles for the mission," Diller said. "Everything is very much on track."

George Diller, a NASA spokesperson here at KSC, said a series of time-consuming issues-such as a cabin leak aboard Endeavour-contributed to the delay.

"We simply ran out of time," Diller said of the tasks needed to prepare the orbiter for its wayward journey.

The check came after a faulty positive pressure release valve was discovered during an earlier check, and was replaced yesterday with one of shuttle Atlantis' working valves. Diller noted the valve was switched out because there was not ample time to receive a brand new one.

Later today, the seven-person crew of STS-118 crew is expected to arrive here at KSC in preparation for an Aug. 7th launch aboard NASA's Endeavour shuttle.

Along with the rest of the crew, teacher-turned-astronaut Barbara Morgan will arrive in T-38 supersonic jet trainers at 5:00 p.m. ET (2100 GMT).

The valve is used to remove excess gas in the event of over-pressurizing cabins in the shuttle. George Diller, a NASA spokesperson at KSC, said there was not enough time to get a replacement valve sent to the space center, so one is being borrowed from Atlantis, Endeavour's sister shuttle.

Diller said the replacement was a success and shouldn't pose a problem to the upcoming launch from Pad 39A at 7:02 p.m. EDT (2302 GMT).

"If we still have a leak, we'll definitely be surprised," he said.

Engineers are now re-performing the cabin pressure leak test which will determine whether or not the replacement was an acceptable fix.

NASA engineers are working through a pressure valve replacement aboard the space shuttle Endeavour as its seven-astronaut STS-118 crew prepares to head towards the Kennedy Space Center (KSC) in Florida for Tuesday's planned launch.

The valve replacement, required to stifle a cabin leak inside Endeavour, is expected to be completed today and is not expected to impact the planned Aug. 7 launch at 7:02 p.m. EDT (2302 GMT), NASA said.

Meanwhile, Endeavour's crew - commanded by veteran shuttle flyer Scott Kelly and including educator astronaut Barbara Morgan - are due to arrive at KSC on Friday at about 5:00 p.m. EDT (2100 GMT).

Commanded by veteran spaceflyer Scott Kelly, the astronauts were scheduled to don their bright orange launch/entry spacesuits earlier today and should have reached the White Room leading into their shuttle Endeavour at Pad 39A in

The seven astronauts of NASA's STS-118 mission to the International Space Station (ISS) are in the midst of several days of prelaunch training for their planned Aug. 7 liftoff. The mission will deliver fresh cargo, supplies and a new piece of the station's exterior framework during an up to 14-day flight.

STS-118 commander Scott Kelly and his crew - which includes NASA's first educator astronaut Barbara Morgan - are undergoing a traditional training session known as the Terminal Countdown Demonstration Test, or TCDT. In additional to visiting their space shuttle Endeavour at its Pad 39A launch site and checking their payload. The astronauts will also perform a dress launch rehearsal to practice final prelaunch activities and emergency escape procedures.

At about 8:30 a.m. EDT (1230 GMT) Wednesday, the astronauts will speak with reporters at Endeavour's launch pad during an event to be broadcast live on NASA TV, which is available by clicking here or using the button at the left.