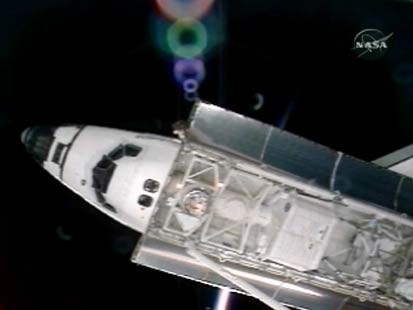 Inching its way into position, Space Shuttle Endeavour made a smooth docking with the International Space Station Friday afternoon, just one step on a complex mission to finish assembling the station by 2010.
"Capture confirmed," the shuttle crew reported as the docking rings of the two ships locked together at 2:02 p.m. EDT.

A couple of hours later the seven shuttle astronauts floated through the docking adapter into the station, hugging and posing for pictures with its three crew members. Two of them, Yurchikhin and Oleg Kotov, have been on orbit since April. American astronaut Clay Anderson has been on the station since the last shuttle flight two months ago.

The astronauts made the docking look routine, though mating two large vehicles in orbit is still anything but. The shuttle and the space station were orbiting Earth at more than 17,000 miles an hour, 214 miles above the South Pacific when they came together.

Before docking, the shuttle's commander, Scott Kelly, put the Endeavour through a slow back flip, so that the space station crew could photograph the wings and underside of Endeavour for any signs of damage that may have happened during launch. Such maneuvers have been a matter of course since the loss of the shuttle Columbia in 2003.

The back flip took about nine minutes, and while the shuttle rotated, the three station crew members shot digital still pictures of the shuttle's heat shield tiles with telephoto lenses.

"Station, Endeavour, start photos," called the shuttle astronauts.
Then, a minute later, "That's the end of the official photos. The rest are for fun." The astronauts later downloaded 296 pictures to the ground for engineers to inspect.
According to the flight plan, the shuttle astronauts will now spend about one week -- more, if needed -- installing new components of the space station. They will extend the long truss that holds the station's solar panels, and add a rack for storing equipment outside the station. They will also replace a large gyroscope that keeps the station oriented as it circles the earth.

Three spacewalks are planned, and a fourth is possible. Previous shuttle flights have been limited by the amount of hydrogen and oxygen the ship could carry to generate power, but Endeavour is configured, for the first time, to draw electricity from the space station's solar panels.

If the system works as hoped, NASA will extend Endeavour's flight from 11 days to 14 days, allowing the shuttle to remain docked at the station for a record 10 days.
The attention-getter on the shuttle's seven member crew is Barbara Morgan, an astronaut who is also the first teacher in space. Morgan, who taught elementary school in Idaho, was the backup to Christa McAuliffe, who died with six other astronauts when the shuttle Challenger exploded in 1986.

Morgan returned to Idaho, but stayed in touch with NASA and joined the astronaut corps in 1998. She is finally flying after a two-decade wait