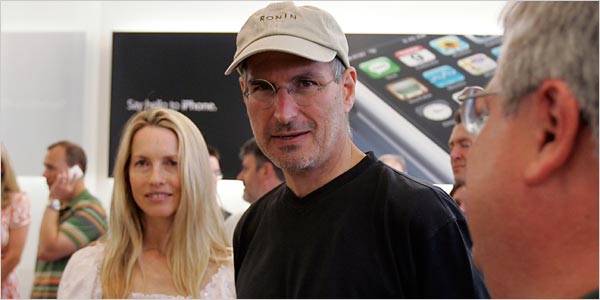 Steven P. Jobs, with his wife, Laurene Powell, is the subject of a blog that parodies his job as the chief executive of Apple.

For the last 14 months, high-tech insiders have been eating up the work of an anonymous blogger who assumed the persona of Steven P. Jobs, Apple's chief executive and one of the world's most famous businessmen.
The mysterious writer has used his blog, the Secret Diary of Steve Jobs, to lampoon Mr. Jobs and his reputation as a difficult and egotistical leader, as well as to skewer other high-tech companies, tech journalists, venture capitalists, open-source software fanatics and Silicon Valley's overall aura of excess.

The acerbic postings of "Fake Steve," as he is known, have attracted a plugged-in readership - both the real Mr. Jobs and Bill Gates have acknowledged reading the blog (fakesteve.blogspot.com). At the same time, Fake Steve has evaded the best efforts of Silicon Valley's gossips to discover his real identity.

Meanwhile, on the other side of the country, Daniel Lyons, a senior editor at Forbes magazine who lives near Boston, has been quietly enjoying the attention.

"I'm stunned that it's taken this long," said Mr. Lyons, 46, when a reporter interrupted his vacation in Maine on Sunday to ask him about Fake Steve. "I have not been that good at keeping it a secret. I've been sort of waiting for this call for months."

Mr. Lyons writes and edits technology articles for Forbes and is the author of two works of fiction, most recently a 1998 novel, "Dog Days." In October, Da Capo Press will publish his satirical novel written in the voice of the Fake Steve character, "Options: The Secret Life of Steve Jobs, a Parody."

Unlike the off-the-cuff ramblings on his blog, "Options" is a well-plotted satire that imagines Apple's chief executive grappling with his real-life stock option backdating troubles and getting help, and bad advice, from friends like Larry Ellison, Bono and Al Gore.

The book, in part, led to Mr. Lyons's unmasking. Last year, his agent showed the manuscript to several book publishers and told them the anonymous author was a published novelist and writer for a major business magazine. The New York Times found Mr. Lyons by looking for writers who fit those two criteria, and then by comparing the writing of "Fake Steve" to a blog Mr. Lyons writes in his own name, called Floating Point (floatingpoint.wordpress.com).

Mr. Lyons said he invented the Fake Steve character last year, when a small group of chief executives turned bloggers attracted some media attention. He noticed that they rarely spoke candidly. "I thought, wouldn't it be funny if a C.E.O. kept a blog that really told you what he thought? That was the gist of it."

Mr. Lyons says he recalled trying out the voices of several chief executives before settling on the colorful Apple co-founder. He twice tried to relinquish the blog, but started again after being deluged by fans e-mailing to ask why Fake Steve had disappeared.

Though manyspeculators have guessed Fake Steve was an Apple insider, Mr. Lyons says he has never interviewed Mr. Jobs nor written a story about the company. "I have zero sources inside Apple," he said. "I had to go out and get books and biographies to learn about a lot of the back story."

Last month, when a reader asked Fake Steve about Apple's succession plan, he replied: "My plan at this time is to live forever and to remain in charge here, though perhaps with fewer restrictions on my power. The truth is, I am not human - I am a man-god, son of Zeus, born to mortal woman but fathered by the ruler of the gods, lord of thunder."

Mr. Lyons receives around 50 e-mail messages a day through the blog, many with ideas for posts, and says the site had 700,000 visitors last month. Recently someone claiming to be Mr. Jobs's daughter, Lisa, wrote to tell him, "You don't sound at all like my father, but your blog is hilarious."

The guessing game around his identity was intense, with speculation centering on a variety of plugged-in journalists, former Apple employees and even Mr. Jobs himself.

Over the last year, Forbes's publisher, Richard Karlgaard, even got into the act, speculating about Fake Steve's identity on Forbes.com several times. At one point he wrote: "The guessing game has begun. Who is writing it? Send me your guesses. I'll gladly buy the most expensive iPod for the first to identify Fake Steve Jobs."

Mr. Lyons said he felt bad and later revealed himself to his bosses and colleagues.

Mr. Karlgaard said he had a good laugh and holds no grudges. "I think it is the most brilliant caricature of an important part of American culture that I've seen," he said. "We're really proud that he's one of ours."

Forbes had planned to move the Secret Diary to Forbes.com in September, although it may now accelerate the move.

The Fake Steve saga calls to mind the guessing game behind "Primary Colors," the political roman à clef written in 1992 by Joe Klein, then a Newsweek writer. Newsweek reacted differently, however, firing Mr. Klein when he allowed other writers at the magazine to speculate on the book's author without tipping them off.

Mr. Lyons clearly used the Fake Steve persona to further some of his own interests and positions. For example, articles in other business publications and their journalists were a frequent target of criticism from Fake Steve, while Forbes got off comparatively easy.

Fake Steve also had it in for the devout fans of the open-source operating system Linux, calling them "freetards." Mr. Lyons has written several articles for Forbes in which he has been critical of the cultlike aura around the free software movement and its founder, Richard Stallman.

He said that he never intended his blog to be mean-spirited and that he is a fan and customer of Apple. "If I really thought the Apple guys were going to find this guy and kill him, I wouldn't want to do it. I was kind of hoping it would be puckish and fun. I think the guys in the Valley like the fact that it makes them into fictional characters. It's a comic strip."

Asked whether he was worried that he would be called to account for some of Fake Steve's stinging, personal posts, Mr. Lyons chuckled and said, "Yes."

As for Mr. Jobs himself - the real one - he did not seem all that interested when told the identity of his online doppelganger. He said in an instant message conversation that he had no interest in reading Mr. Lyons's novel.

Posted by Md Moshiur Rahman at 4:04 AM