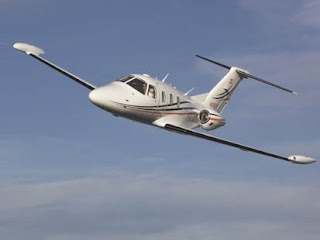 Air taxi startup DayJet late last week was in the final stages of proving runs with its small fleet of Eclipse 500 Very Light Jets in preparation for the launch of commercial operations by the end of the month, founder, President and CEO Ed Iacobucci said last week. Completing the proving runs and adding the Eclipse aircraft to DayJet's Part 135 certificate are the final steps remaining for DayJet to begin its "per-seat" air taxi service, Iacobucci told BA in a telephone interview Thursday.
The company had flown more than 25 hours with an FAA inspector on board by last week, he said, adding that the flights "have been going very well." The DayJet Eclipse fleet had accrued 855 flight hours by last week and the first aircraft just underwent a 300-hour check.
Operations could begin on a limited basis later this week if everything goes smoothly, Iacobucci said, but the company is actually targeting the end of the month to begin air taxi revenue flights.
Earlier this year DayJet was shooting for June to begin operations, but that schedule had to be scrapped after the Eclipse 500 experienced pitot heater problems and was limited to flights in visual meteorological conditions (BA, April 16/173). Those problems have since been resolved with a new design for the system. Iacobucci, however, said the pitot problems were only part of the reason for the delay in launch, and added that the additional time has proven useful to DayJet to ensure that all the necessary systems are in place for a smooth transition.
Launch comes just after DayJet secured $140 million in senior debt and financing. "Securing this initial debt facility is a significant milestone for DayJet, as it enables us to continue the uninterrupted growth of the world's first commercial VLJ fleet," Iacobucci said in the announcement of the finance deal. DayJet has taken delivery of nine Eclipses and should add three more this week, he said. DayJet hopes to continue to expand its Eclipse fleet in the upcoming months and have 30 to 40 aircraft by the end of the year -
if everything goes perfectly," he said.
The capital also is helping DayJet increase the number of pilots. DayJet had 30 pilots on staff and is in the process of adding seven more. Those numbers will continue to increase over the next several weeks, he said. The initial crews are comprised of high-time pilots, many of whom have experience with major airlines, while others come from regional airlines, corporate operations or the military. Iacobucci said the company wanted to ensure that the initial cadre of pilots had enough seniority to establish the proper culture for DayJet

Investors Waiting To See
The latest $140 million financing infusion comes on top of the more than $60 million already invested in the company, providing enough funding for the launch. "We're all set right now," Iacobucci said, adding the next round of funding that DayJet might seek would be "growth capital." But that wouldn't come until DayJet has established itself and proven its model over the next several months, he said. Iacobucci was confident that DayJet has attracted sufficient interest among potential investors, but those investors want to observe the company's initial in-service experience. "The next six months will validate whether the projections we made are or are not in synch with reality," he said, but added that he was pleased with early indicators.
DayJet is selling a membership service to potential travelers. Customers must register to fly on the air taxi service. Iacobucci said some 200 companies have subscribed and the number of individual members has grown to about 1,200, nearly double the number of members that DayJet had just a few months ago (BA, April 23/185). DayJet is now concentrating on spooling up its regional sales team to ensure membership is spread out throughout the network rather than concentrated at one location.
DayJet is initially operating permanent "Dayport" bases at five locations in Florida - Gainesville, Lakeland, Boca Raton, Tallahassee and Pensacola. But DayJet envisions expanding those Dayports to more than a dozen, covering four states over the next several months.

FAA in the past year has begun to scrutinize per-seat service - which the agency has termed "fractional charter" - and has narrowly defined what could be considered a Part 135 operation (BA, July 30/41). FAA told a couple of carriers that it viewed their negotiations with a second or third customer as a Part 121 transaction, not Part 135. FAA was primarily concerned that these carriers were guiding second or third customers to an already chartered flight.
Iacobucci said he was "very aware of this problem," calling the issue a complicated one. But he added that DayJet has worked very closely with both FAA and Transportation Department officials to ensure that the company's service is run in accordance with Part 135. The company retained a team of scientists and engineers to develop a sophisticated computer program that will mix and match customers and available aircraft with the customers' travel plans, he said

The service does not lure customers to particular flights, but matches based on customer needs, he said. Under the DayJet model, there is no pre-set flight or fixed schedule. "When DayJet members request flights online, the system 'individually negotiates' a price based on their travel window," Iacobucci said.
The company spent two years and $20 million developing the system, tweaking it as FAA and DOT continued to review the plans, he said. "Instead of saying you have to change the rules for us, we've said we want to embrace your rules," Iacobucci said. "This isn't something that we just whipped together."
Iacobucci acknowledged that DayJet is under a spotlight because the service is a new business model. "There are a lot of people watching us," he said. But that interest also has attracted business, he said, noting that DayJet has no shortage of people who have requested to be aboard the first flight.
Posted by Md Moshiur Rahman at 10:15 PM