DefenceTECH:Spotting the Magnetic Eye & Attack of the Battery Man! 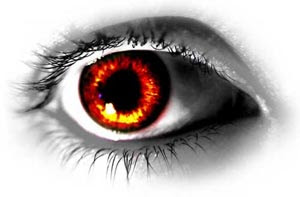 For full rage of Security and defence and to develop the technology in the defense sector their are many innitiatives which can reach the pick...

Tracking eye movements can let a computer know when someone is paying attention and identify exactly what they are interested in, but it's also a tricky business. Most systems work by using a camera and image recognition software to identify a person's pupils and work out the direction of their gaze.

In real-life situations, however, tracking systems can be easily confused by rapid head movement or spectacles.

Now, the Office of Naval Research is looking for better ways of tracking eyes in the hope of developing military applications, such as tracking a fighter pilot's gaze.

So it has a funded James DiCarlo, a neuroscientist at the Massachusetts Institute of Technology in Cambridge, US, to develop a magnetic contact lens.

A soldier would wear the lenses and a magnetic sensor attached to the side of his or her head. The sensor picks up any changes in the local magnetic field and works out how the wearer's eyes are moving.

The system should work regardless of head orientation and movement, lighting condition,s or "face furniture" such as goggles or glasses. The team says the magnetic lenses could also let disabled people control equipment such as wheelchairs.

Attack of the Battery Man
Just thought I'd forward a new Pentagon announcement intended to prompt a competitive solution to the problem of lightweight power generation for the increasing number of electronic devices carried by grunts and Joes in combat...

The Director, Defense Research and Engineering, John Young today announced a public prize competition to develop a wearable electric power system for war fighters. The competition will take place in the fall of 2008 and the prizes are $1 million for first place, $500,000 for second place and $250,000 for third place.

The essential electronic equipment that dismounted warfighters carries today - radios, night vision devices, global positioning system - runs on batteries. This competition will gather and test the good ideas for reducing the weight of the batteries that service members carry. The prize objective is a wearable, prototype system that can power a standard warfighter's equipment for 96 hours but weighs less than half that of the current batteries carried. All components, including the power generator, electrical storage, control electronics, connectors and fuel must weigh four kilograms or less, including any attachments.

Prizes will be awarded to the top three teams in a final competitive demonstration planned for the fall of 2008. At this "wear-off," individuals or teams will demonstrate their prototype systems under realistic conditions. The top three competitors that demonstrate a complete, wearable system that produces 20 watts average power for 96 hours but weighs less than 4 kilograms (~8.8 lbs) will win the prizes.

A public information forum will be held in September in the Washington, D.C., area to brief potential competitors on the technical details, the competition rules, and qualification requirements. Competitors must register to participate in the prize program by Nov. 30, 2007. The competition is open for international participation; however the individual or team leader must provide proof of U.S. citizenship. Details on the forum, as well as contest registration and rules are posted on the Defense Research and Engineering Prize Web site.